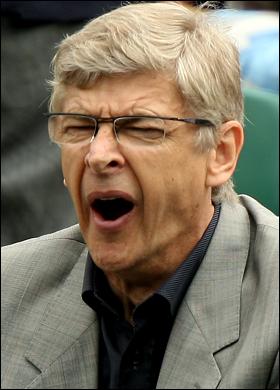 Every morning I wake up with the hope that today is the day that we have bought a great player that will make the difference and turn us into champions again and every night I go to bed thinking that another day has gone and we bought nothing and let down by our manager.

The transfer window has been open for 22 days and still we wait for Wenger and Gazidis to find the players we so badly need.

The Premier Champions Man Utd are not standing still, Sir Alex is getting their business done cleanly and efficiently..with Jones and Young.

Other clubs have signed players and are improving but yet Arsenal are linked with average players like Odemwingie, Gervinho, Seb Larsson and Joey Barton and a host of others.

Are they really better then what we already have? Yes we need new blood BUT we dont want signings for the sake of it. They must be better then the players already at the club. I cant see where the likes of the players named above would fit in or start ahead of?… People telling me that Gervinho is class but from what I can see he has only ever had 1 good season in his life and has never played at a big club. The last thing we need is a player who will take 2 years to come good for us and just like Nasri and Flamini the time they start looking the part they want to leave for nothing as there contracts run up…

Abroad other clubs have also been busy with Real Madrid signing Nuri Sahin etc. But where is Wenger?

This morning I got an email telling me that Arsenal made last-minute attempt to sign Raphael Varane, but Zidane had convinced him to join Real Madrid. Why last-minute? Its the same with Phil Jones? Why is Wenger coming in late for players? You would think he has identified the players he wants way before the window even opened.

Wenger said a few weeks ago that it’s not impossible that we could sign Benzema, but yet we can’t even agree personal terms with a player from WBA. Odemwingie said that we offered him pennants!

Gervinho has apparently agreed wages with us and now the 2 clubs are trying to agree a price for the player but like summers gone by Arsenal drag it out and turn it into a game of poker. I cant say that I really want Odemwingie or Gervinho but it shows how poor we are that we cant even sign players like them but yet Wenger is telling us we could sign Benzema?.

But do we really need to sign attacking players before we addressed the root of all our problems at CB? We have again been linked with Samba and Cahill but still nothing and now other clubs are sniffing around Cahill and today the Blackburn manager basically said that Samba was under a 5 year deal and wouldn’t be sold.

I dream of Breaking News on Skysport news that Arsenal have signed Benzema, Parker and Samba! But I know it’s just a dream. Wenger is going to replace old crap with new crap and all on budget.

Its a different summer but its very much the same old Wenger and Arsenal. Sleeping in the transfer market!

And they ask us why we moan at the raise in ticket prices, and people also wonder why you see so many empty seats at home games?

I hope Im proved wrong but this summer is just going to be like the last 4 summers. A few avarge signings but nothing of note, Wenger coming out with the same line that “we did everything we could but clubs didnt want to sell” crap and us going into the season with the same problems with the likes of Almunia, Denilson & Rosicky STILL at the club.

The problem with Wenger is this, he never wants to pay the asking price and because of that we miss out on players.

All that is left for Wenger is players like Chamakh, Kos and Sqill, Sol Campbell, Silvestre Bischoff etc.. Cheap players  who can do a job but are not going to turn us into Champions.

Wenger and Gazidis are a joke. Players running down contracts and leaving for next to nothing, lack of spending on needed players.

If we dont have the money then SELL Cesc who clearly wants out and reinvest that money on quality players.

Where are the signings? Where is the ambition?….

Oh how the mighty have fallen. Wenger must go
Who Arsenal should Buy & Sell this summer?