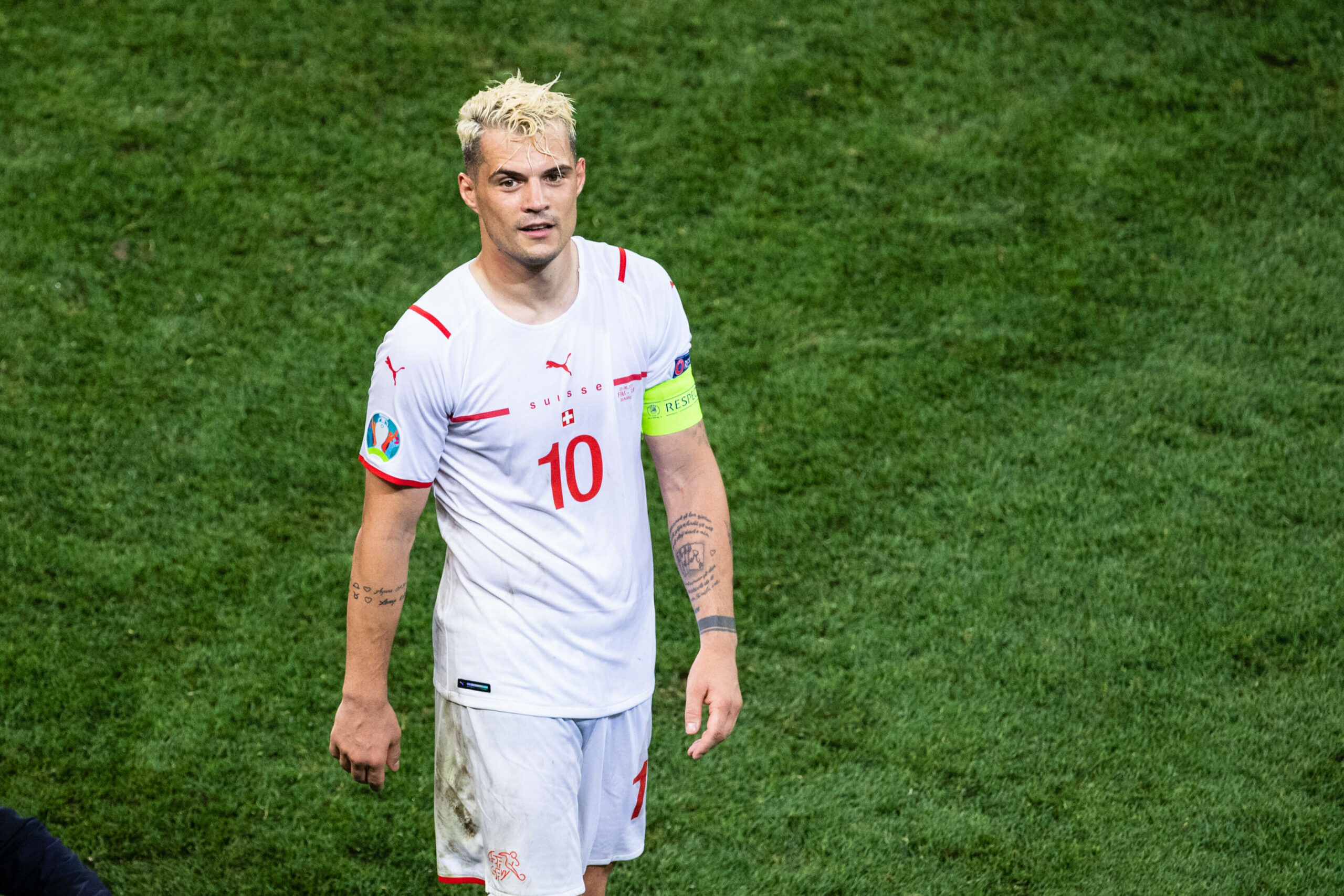 The Arsenal midfielder is linked with a move to AS Roma.

As soon as Mbappé missed the crucial fifth penalty, the cameras panned to a beleaguered Didier Deschamps. As the colour drained from the Frenchman’s face, Roy Keane’s voice was heard from inside the ITV studio: “I’m glad they got punished for that. You can have all the quality in the world, but if you don’t turn up with the proper attitude, it’s hard to switch it back on. And Switzerland have been absolutely brilliant.” Nobody embodied the Swiss’ exemplary approach better than captain Granit Xhaka.

Xhaka proved to be a calm and experienced influence throughout a night of intense drama that saw Switzerland open the score early on, only to find themselves 3-1 down against the world champions with only 15 minutes left to play. In a midfield battle with fellow Premier League starts N’Golo Kante and Paul Pogba, the Arsenal man rarely looked out of place as he boasted his impressive passing range. He claimed the assist for Gavranovic’s goal to send the tie into extra-time with an expertly threaded ball that was fizzed through the France middle third. The Swiss captain’s highlight reel will also see plenty of blocks and interceptions, as his team largely restricted the attacking threat of Mbappé and Griezmann.

It is however Xhaka’s on-the-ball performance that was most interesting to Arsenal fans. The midfielder has been Arsenal’s most progressive passer in recent seasons, and is relied upon heavily to bring the ball forward into the opposition’s half. In the last Premier League season, Xhaka averaged 7.6 progressive passes per match, placing him in the 95th percentile for midfielders in the league. When it comes to passing into the opposition’s final third, Xhaka averaged an impressive 9.5 passes per 90 minutes, which is in the 96th percentile in the division.

Captaining Switzerland into their first ever major tournament quarter-final, Xhaka achieved 17 final third entries against France. Many of those progressive actions were long balls, of which he completed 8 out of 8 attempted. He created 3 chances and completed 2 out of 2 attempted through balls. More than a midfield general, Xhaka was a true quarterback for Switzerland. The performance earned him the official UEFA Star of the Match award.

Sky Sports reported earlier this month that Roma were in advanced talks to sign Granit Xhaka. Just like at international level, Xhaka has been the hub through which the play is built for his club side. Despite his mobility and decision-making being questioned during his 5 years at Arsenal, he has asserted himself as the leader of the midfield and a key component to the way Arsenal progress the ball. Without him in the team next season, the burden to move the ball into attacking areas will presumably be shared between Thomas Partey and at least one new signing.

Granit Xhaka’s star performance against France was characteristic of the level he routinely reached with Arsenal in the second half of last season, and demonstrated everything that Arsenal will need to replace when looking to rebuild their midfield this summer. It may be time to move on from the Xhaka experiment at Arsenal, but the player is rife with quality that will shine elsewhere, in different circumstances.

All statistics provided by FBRef and Squawka