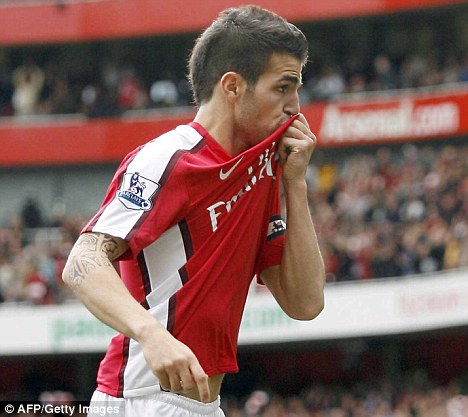 If Cesc really wants out then he must put in an official transfer request.

Today Spanish journalist Graham Hunter told Skysports news that “if Cesc wants to join Barcelona he would need to hand in an official transfer request to Arsenal, otherwise the deal is dead”

Barcelona want Cesc,  but they want  him on the cheap and wont pay the £50m Arsenal want for him.

Arsenal have already rejected a £29m bid and are now not even prepared to listen to any offers for the player.

And rightly so. Cesc is contracted to Arsenal for FIVE more years and we don’t want or have to sell.

Not a lot of people know this, But when a club sells a player they have to pay off the remaining duration of his contract (Loyalty bonus) If we were to sell Cesc for £30m if would cost us a fortune to pay off his contract.

NOW! If a player hands in an official transfer request, they waive there right to any loyalty bonus. SO ALL the transfer fee goes to the CLUB.

The Daily Mail have reported that Cesc will hand in an official transfer request to ensure that he makes a move to Barca.

Will Cesc really kiss goodbye to FIVE years of loyalty bonus? I doubt it! But maybe this is what Arsenal have been waiting for?…. Show your hand Cesc.

Debate this more on our forum [HERE]