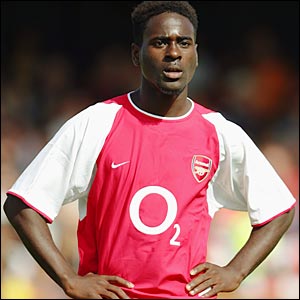 This morning I see a host of sites reporting that we beat Chelsea in the race to sign a child (15 year old) Kyle Ebecilio from Feyenoord.

No doubt that most of you are happy about this and think this is a great signing for the future?

But lets just think about that for a sec…

Since wenger arrived at Arsenal he has signed players like this and said that the future would be great, but in the 13 plus years that Wenger has been at the club how many of the so called “Superkids” have gone on and made it at Arsenal?..Cesc, Clichy?

Plus the likes of Quicny, Svard, Volz etc etc… The sad fact is that for ever Cesc Fabregas we sign as a kid there are 10 Vincent van den Berg at Arsenal, so i apologise for getting excited about the news of us signing more kids for the future.

Sometimes i question why do we waste so much time and money of signing kids when 90% of them never make it at Arsenal. No doubt they are some very talented players but its a myth that Wenger gives youth a chance. Look at the likes of Carlos Vela and Armand Traoré at Arsenal. both players have been sent out on loan and returned to the club last season. Both hardly never got a chance and were overlooked despite loads of injuries in there positions last season. Silvestre played ahead of Traore at Left back and Vela didnt even come close to getting a chance up front, even after the likes of RVP,Nic and Eduardo were all missing.

Its seems to me that if a young player comes to Arsenal they are hailed as the next big thing and the new Henry or Bergkamp when in fact they are just talented kids who will more or likely end up like Arturo Lupoli or Bischoff in some lower league team.

Wenger has a massive rep for developing young talent as being his main skill as a coach?

All hailed by Wenger in the past as being the future of this club and all sold before even getting a sniff, Now we have the likes of Jay Simpson, Jay Emmanuel-Thomas, Håvard Nordtveit, Nacer Barazite,Francis Coquelin,Henri Lansbury, Pedro Botelho and many more… The sad fact is that most of the players named above will not make it at Arsenal and will end up like Graham Barrett.

My point is, Just because we sign a “SUPER” kid, don’t expect them to go on and make it at Arsenal. I would like Arsenal to take time out of signing players for the future and start thinking about the present