What we, as a club, are lacking… 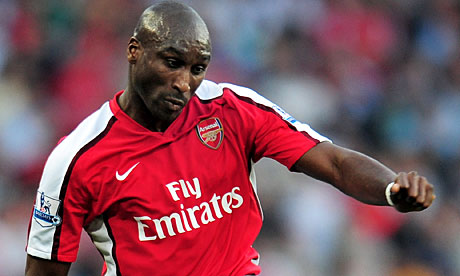 In 2006, Arsenal football club one their last trophy. In 2006, Arsenal Football Club lost their greatest asset. He would return, but sadly, no longer in his prime. Arsenal are currently seeing the creation of a player with qualities similar to him- Jack Wilshere. Jack, like the great man I am talking about, is a leader, he’s tenacious, but crucially, he’s slightly crazy. You’ve guessed the talismanic centre half I’m speaking of – Sulzeer Jeremiah Campbell.

Jack’s attacks on referees (like Phil Dowd) and Barry Ferguson reflect his need to win. But they also reflect, as did his unnecessary exposure in the papers for badly reported nights out, a slight madness in him.

Sol Campbell went to Nottingham County when he had the ability to stay in the Premiership. He went to Arsenal from Tottenham. He was first a striker, then a centre half. No in between. He did not stay at Arsenal, but instead went to Newcastle, at 36. He is mad.

Arsenal, for the past 5 years, have lacked madness. But I feel it is returning.

Jack has that air about him, that he can do anything, at any time. So do other Gunner youths, too, Szczesny broke both his arms from a dare in the gym, and he’s a keeper. Diaby decided to get a red card at 4-0 up. These may not sound like good attributes, but it is these madness that is needed for a side that wants to win.

The golden age of Sulzeer is gone. But the youth is growing up, and they have learnt from the masters – a 35 year old Sol – who played for us last season.

I think we’re not far, but then again, maybe I’m mad…

[Ratings] “spend some f##king money”
Transfer window about to open. Who will come and go?