What is the point of Tomas RoSICKy? 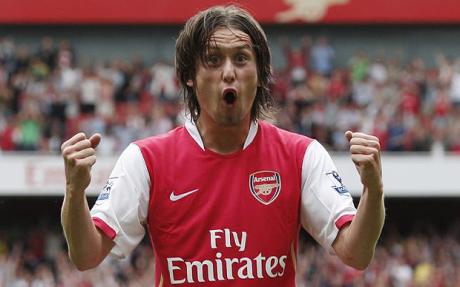 Seriously! Can somebody please tell me why this geezer is still at the club cashing a wage?

What is the point in keeping Tomas Alwaysicky at Arsenal anymore?  We signed Rosicky in 2006 and in 5 years he has played a mighty 88 league games and 121 games in total, disgusting!!!

Rosický did not feature for Arsenal during the entire 2008–09 season due to his strange hamstring tendon injury. He eventually returned to full training in May 2009, after eighteen months of absence, that’s more time out then Eduardo & Ramsey who both suffered broken legs. 18 months out for a hamstring injury?.. DISGUSTING!!!

In August 2009, he had again picked up another niggling injury, this time straining his hamstring, again out for six weeks.

In Jan 2010,  Arsenal did something amazing…for some crazy reason Arsenal & Wenger rewarded him with a NEW long-term deal?….WHY?…What did he do to justify a new contract?

And now YET again Rosicky is OUT  and will miss this weekends game vs Wolves with, wait for it.. this time its a groin problem he picked up playing for the Czech Republic in midweek.

What has this player ever done at Arsenal? I can seriously only think of a handful of moments since 2006, how the hell did he manage to get a new deal but we allowed players like Edu, Flamini, Fran Merida to leave on a FREE?

No doubt Rosicky will return in 4/6 weeks, come on a sub and give away a pen and get a new deal until 2020 before picking up a broken toe nail.

Sorry Tomas but you are robbing the club.