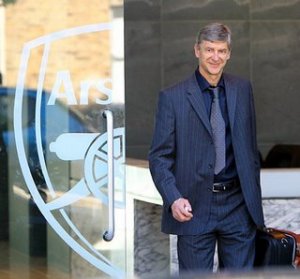 Arsene Wenger has just been given a new £6m-A-Year contract, and a 20% pay rise by Arsenal.

Only Jose Mourinho who won the treble with Inter Milan last season, has a better deal Ancelotti and then Wenger. Jose is on a reported £8.5m annually.

But what has Wenger done “recently” to justify this massive pay rise?

Arsenal and Wenger have not won anything since 2005, a football manager should be judged on success on the football pitch, not by how much money he makes or saves the club.

Yes Wenger has done a very good job financially for the club, So it could be argued a rise is warranted quite easily. But is it a football managers job to do this? Wenger has a degree in Economics but he is not an accountant, and you dont need to have this skill to be a great fooball manager.

Wengers job is getting the best out of his players and getting the footballing tactics right on the pitch. Something he has NOT done since 2005.

Its the boards job to do all the off field stuff isn’t it?

Or do you feel that being a football manager isn’t all about winning? The manager has some responsibility to making sure the club are financially secure, it’s in the long term interest of the club. And the wenger way of balancing the books comes first.

If that is the case then our next manager should be Alan Suger or Theo Paphitis, and they can carry on Wengers policy of treating the club as a business and making sure that we make a profit each year.

Personally I feel that a football manager should be responsible for on the field matters, tactics and getting the best out of his players and its down to the board room to worry about the rest.

I really cant see why and how Arsenal have rewarded Wenger with a massive pay rise for underachieving and failure.

I guess it depends what your goals are? If you want to win things then Wenger has done a poor job since 2005.

If you want to make a massive profit then Wenger has done a great job and the £115,000 a week wages is well worth it. Well at the end of the day he helped make it didn’t he. Maybe that’s why he never spends?

Prior to 2005 Wenger was a football manager, Now he cares about one thing, PROFIT!  And that’s why he is being rewarded with his massive pay rise.

What do you think? debate this more on our forum (HERE)