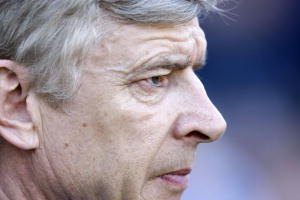 In April this year Wenger said “I can now compete with Chelsea for transfer targets”. As far as I am concerned this clearly set an expectation that this year, above all years Wenger was set to finally spend some money. I probably wasn’t alone in being excited about the prospect of some real class arriving..

Another of Wenger’s recent comments was that he wanted to wrap up all transfers before the start of the world cup. ‘All told, I believe the earlier you settle your teams for the next season, the better it is and the less anxiety you have’. Good to see that worked out well then, but why break the habit of a life time when last minute shopping always works out so well for us. I mean, it’s not as if slotting in a new goal keeper at the last minute will cause any anxiety.

It’s not all bad news however; Wenger signed Chamakh and Koscielny after beating both Chelsea and Manchester City in a fierce bidding war for such world class talent. It was reassuring to see us competing with the big boys leaving Chelsea to focus their attention on secondary targets like Kaka and Balotell.

If we have money to compete with Chelsea for transfers, why are we still bargain basement shopping and looking at free transfers? (Cole, Chamakh, Ballack – yep apparently we were looking at Ballack).

Wenger also said judge me in August on my transfers, I’m not sure we have to wait that long. Sure there is still 6 weeks to go and Wenger may amaze us with a transfer coup that will have Arsenal fans celebrating outside the Emirates, but based on Wenger’s previous porkpies I’m not expecting any world class talent to arrive.

Actually, I feel kind of disappointed with myself for falling for Wenger’s lies (yet again). I really thought this season would be different and with Cesc wanting to leave I thought Wenger would make a statement of intent to persuade him want to stay.

At the shareholders meeting this year, I hope Wenger gets some tough questions about his lack of transfer activity instead of 50 questions about how he enjoyed the food in South Africa. It really is time for fans to wake up and start asking questions, even the most die hard AKB can’t keep giving him unconditional trust. I doubt it though, Wenger has very cleverly redefined the meaning of success and brainwashed all the AKB’s in to believing that success is not about winning trophies, it’s about finishing in the top four. Success Wenger style is a bit like having a car fail an MOT and redefining the MOT test to ensure the car passes. Or taking a flight to Australia and after a 24 hour flight arriving in Paris to be told that there is a lot of competition for flights to Australia, and besides Paris is like Australia because it’s foreign. In fact it’s better because it’s closer to home. Shortly after you find that the pilot was a 17 year old, but not to worry because he gained valuable flying experience.

No doubt Wenger’s personal army of elite AKB commenter’s will be alerted to the fact that someone is questioning the great man, how dare anyone express an opinion that conflicts with their view, and will be here in their droves not so politely telling me what team I should support. But I really hope this is Wenger’s last year, I want a manager that believes success is winning.