Wenger is like Arthur Daley in the transfer market!

When it comes to sniffing out a cheap deal of 2 there ain’t many better then the Arsenal manager Arsene Wenger.

Wenger is extremely cleaver when it comes to getting a player at the right price and haggling over a deal, I can see Wenger now..”You want £100 pounds? Ill give you £50 take if of leave it, whats that give me £75 and you have a deal? Bollocks £55 or im walking away! Ok SOLD”

He is the type of bloke you would want standing next to you when you go and buy a 2nd hand car thats for sure..In some ways he reminds me of Arthur Daley from the ITV show Minder.

I have no doubt that Wenger is working hard as we speak and trying to get the best deals for the club, Why should he go out and spend more then he feels the players is worth? Wenger has never done so on any player and you have to respect the way he does business.

Some might say that Wenger is maybe “too tight”and we might have missed out on a few players ( Alonso) in the past as wenger stuck to his guns and didn’t pay over the odds or what he felt the player was worth. But credit to Wenger, he has the clubs interests at heart and treats the clubs money as if its his own. What other managers in world football can say the same?  Most people in the business are snakes and go and move clubs for more money. Wenger has beeen loyal to Arsenal and we have to respect that and be as loyal back to him.

Some managers like Harry Redknapp need a golden pot of cash to be able to try and achieve success. With Wenger he has keep Arsenal in the top 4 for a number of years on a tight budget. Where other clubs do there shopping at Harrods Wenger has had to go to primark.

Now Wenger finally has some cash, he is taking his time and making sure he is not blowing it for the sake of just spending.

I know and understand that as fans we want signings now but we have to be patient, Good things come to those who wait, and we have the best wheeler and dealer in the game. 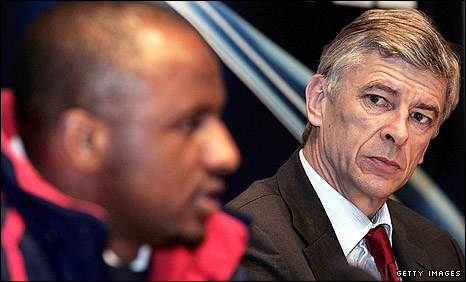 Arsenal Bid €7m for 6ft.5in Argentine defender
The problem with Wenger is he wants everything on the cheap