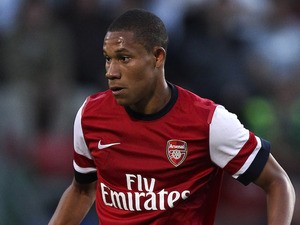 It has taken a while for the Brazilian left winger to attain a work permit but finally after 4 long years of waiting ,from next season he will be eligible for the Arsenal first team. Silva was signed in 2010 at the age of 17 years of age for £3.5 Million from Brazilian side Fluminese and is a very highly thought of attacker.

The 21 year old is currently having a loan spell with Spanish side Almeria which is his 5th loan spell. He has previously had spells with Levante, Alcoyano, Ponferradina and Murcia.

Talking about being granted the relevant paperwork, he said: “It is very important for me. I could go back to Arsenal next season if Wenger wants me to.

However, he added: “I am not going to worry about my future and my only desire right now is to help Almeria preserve their La Liga status.

“At this moment, I am focused on the present.”

Wellington Silva is definitely a work in progress but is a real hot prospect if he is given the chance to prove himself, However Arsenal and Arsene Wenger have a history of moving young players on that do not hit the ground running.

There is currently a vacancy for the wide left position of the front three which still has not been snapped up by anyone, many players have put in a shift there but not one player has shown the consistency required to nail it down. Lukas Podolski and Santi Cazorla have flattered to deceive from that area and with the predicted arrival of Silva to first team proceedings from next season he could be a contender for that role.

5 Defenders That Arsenal Could Turn To In January
Is Jurgen Klopp Wenger’s Natural Successor?