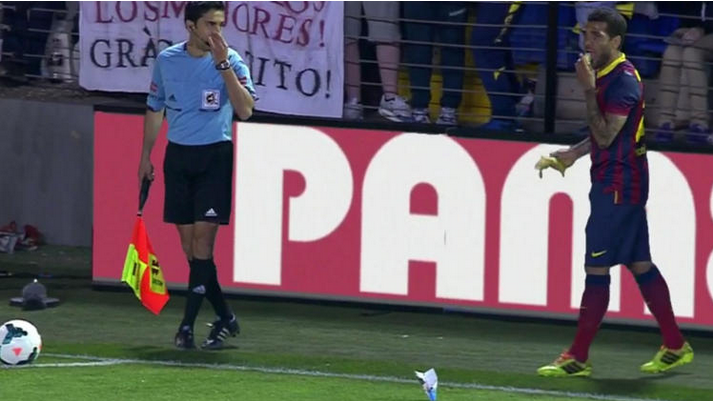 Barcelona took on Villarreal last night at El Madrigal and successfully overcome a 2 goal deficit to win 2-3 but the real hero of the night was Dani Alves after his reaction to racist behaviour from fans.

As he went to take a corner a banana was thrown in his direction, instead of picking up and giving it to the referee he decided to go peel the banana and eat it in front of the crowd as you can see on the video below. I can’t help but think this is a moment of pure genius and what a fantastic way to humiliate the unintelligence of these people who continue to spread their bad vibes through football.

After the game Dani Alves spoke about the incident and said:

“I’ve been here 11 years and I’ve been suffering this the whole time, so I just face it with humour.

“We aren’t going to change things easily. If you don’t give it importance, they don’t achieve their objective.

“I don’t know who threw the banana but I want to thank him. It gave me the energy to put two more crosses in for our goals.”

After the game Gary Linekar tweeted to prise Dani Alves and Neymar posted a picture of support too.

What a great reaction and hopefully other players who endure this during games can have the same response. It was a rather cheeky but clever comeback to have and he might just have set a really good example of how other players should deal with this in the future.

Racism seems to have reared it’s ugly head in football over the last few years but if every player dealt with it in the same way then they will only shame these people into realising how stupid their views are.