When you think back to the long list of English players in Arsenal’s history it is really hard to pick a top 5 or even ten for that matter as we have been fortunate enough to have had many.

The ‘Romford Pele’ aka Ray Parlour was possibly one of our most important players, highly underrated he never truly got the praise that was due to him. Looking back he was as important to us as what Paul Scholes was to United. He was a work horse that never stopped trying to get the ball from a to b, he was tough in his tackling and played a very physical game and this wore out whomever was marking him on most occasions. Parlour was a hero, there were so many great moments that went unnoticed or overshadowed and he really did end up being one of the coolest guys we have had, his humour kept the team and managers he played for thoroughly amused too.

“Remember who you are, what you are, and who you represent!” This speedy midfielder joined Arsenal as a nipper and rose through the flanks to be one of the best midfielders we have ever had. If there was ever a natural at football it was Rocastle, he just knew the game inside out and possessed incredible technique and skill. What Rocky was mainly known for was his pace and flair, Arsenal had a reputation for being boring and Rocky changed all that when he joined the first team. After struggling initially under Don Howe he soon made it very hard for him not to pick the talented player and an England call up also cemented the rising opinions throughout the football world. Under George Graham he thrived even more, he provided assist after assist for Wrighty, Smith and Campbell and loved to entertain the fans with his superb passes too. Sadly injury marred the end of Rocky’s career but he will never be forgotten for what he contributed to Arsenal. No Arsenal or England XI is complete without David Seaman, he was one of the best goalkeepers of his generation. Safe Hands Seaman joined Arsenal in 91 replacing Lukic who decided to leave for Leeds United and he instantly was a hit. Seaman is a big reason Arsenal were so successful throughout the period he was there, his presence in goal added something special to the team and solidified that back four that GG was trying base his whole team on.  They all spoke of how much confidence it gave them to look over their shoulder and see Seaman standing there. His best season was when we won the league and only conceded 18 goals in the 91 season, which was an impressive year of form for him.

When Wrighty joined the first thing we noticed that he had bundles of energy and the opposition defenders hated playing him for that reason. Wrighty was just what we needed when we signed him in 91 and along came this small incredible striker whose eye for a goal and finishing skills were bright bold and full of life. Wrighty made us fall in love with him, he was cheeky, impatient, and provided us with many hours of entertainment as his football was beautiful to watch especially when he was paired up with Bergkamp in the later parts of his career. What Wrighty will always be remembered for his goals and breaking Cliff Bastins record by scoring 185 goals in total for the club. He never got the credit he deserved in terms of his England career but at Arsenal he was unduly appreciated.

“I will sign every contract Arsenal put in front of me without reading it.” 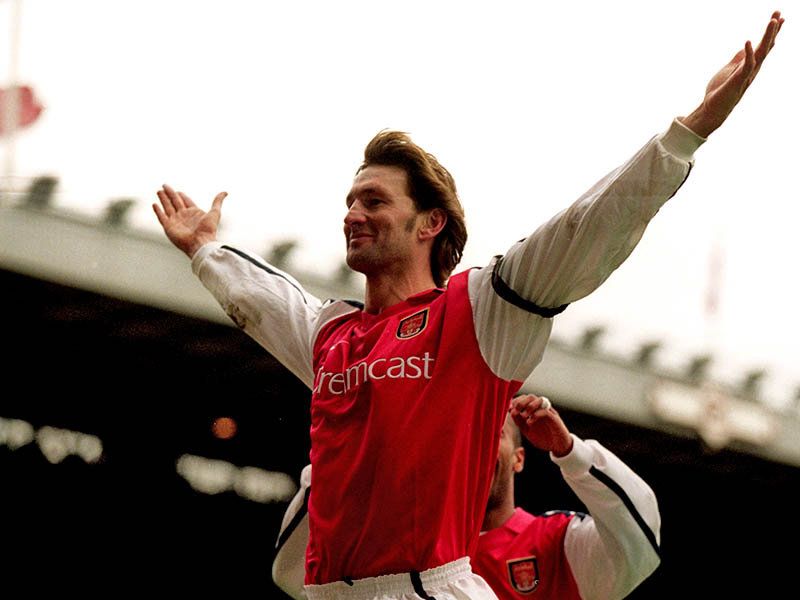 In 1980 at the age of 14 years old a young lad by the name of Tony Adams signed for Arsenal’s youth team and rose up through the academy to become one of the greatest players the club has ever had. Adams was quickly installed into the first team at the age of 17 and within 4 years he had become club captain and leader of the ‘famous four ‘defence alongside Steve Bould, Lee Dixon and Nigel Winterburn. They understood each other and communicated so well that they all knew where they were meant to be, Adams strong with his aerial ability and blocking and Bould with very similar skill became a great centre back partnership for the team. That particular defence went on to excel under George Graham and later on Arsene Wenger.

There has never been a player to this day that has loved the club as much as Tony Adams, Arsenal really was his life and that was always evident on the pitch as well as off, he’s always said he struggled when it all had to end and he still says that he would “love to be Arsenal manager”.  He gave his all in every game and commanded that team with such conviction. He was a tough and gutsy defender, it didn’t matter what part of his body he had to use to defend he would use it, he had bundles of talent as a player but as a captain he really shone.

He played 669 games and won 10 trophies during his Arsenal career. George Graham called him his ‘colossus’ and Arsene Wenger called him a ‘professor of defence’ and for the fans he will always be up there in legend status for us. That is why he is simply the best English player we have ever had.