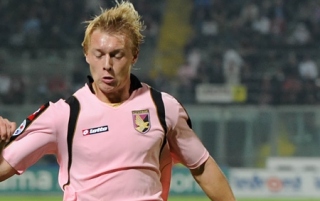 Tottenham look set to have beaten the likes of Arsenal and Man Utd in the race to sign Simon Kjaer. Reports this morning comfirmed that Palermo have accepted a €35m-bid for Defender Simon Kjaer and Striker Edinson Cavani

“Tottenham have bid €35m, an offer we cannot refuse, seeing as the two players have both said they want to leave,” Palermo President Maurizio Zamparini told Sky Italia television, stressing that the Serie A club would reinvest the money received from Spurs.

Kjaer, 21, is highly-rated as one of Europe’s most promising defenders and was a summer target of Arsenal and Manchester Utd, his arrival at White Hart Lane would be a major statement of intent from Redknapp.

Debate this more on the forum [ HERE ]

Guus Hiddink – “The German passport for Mesut Özil is false”
Why are people complaining about Koscielny?