SORRY Arsene but its time to go!!! PART 2 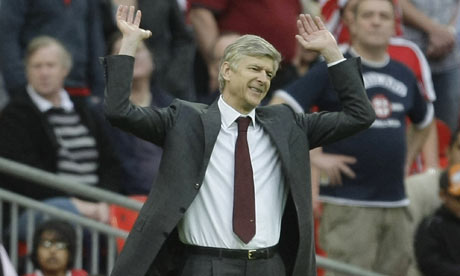 I received a lot of abuse for my last article….i take it constructively however, as ive been where so many of you have.

Many posters who have interacted with me have actually criticised me for my constant enthusian and positivity regarding Arsene and the club.

My last article had a lot of emotion yes, but i also feel i spoke a lot of sense. many of you constrewed my comments to be that of a plastic fan….any who thought that are dead fucking wrong. im no plastic fan, sure, ive been a fan for not as long as some of you, around 8 years, but the FIRST football match i EVER sat down and watched in totality was an Arsenal match. until i saw that game i had NO interest in football. none at all….but the way they played made me love them. in fact, the first game i was saw, they lost to southampton, i had no knowledge of the league, how good arsenal were, or WHO they were, but i loved the club and the players.

Now, when i decide to speak my mind, im a fucking plastic? I would follow this club to the depths of the non football league, i LOVE this club, i BREATHE for arsenal…seeing them lose crushes my spirit….on behalf of myself, the other fans and even the players….i cant STAND to see us lose.

how about you people opening your eyes??? i UNDERSTAND what you’re saying, arsene has done so MUCH for the club, and i thank him eternally for that, but what of the more recent seasons, is it really unreasonable to suggest the club is seemingly standing still? really? i understand we may lose players if arsene leaves….and this is one of the reasons i still feel hesitancy about him leaving, but what if he stays…will we truly improve?

at the end of the day, as much as my brain says he needs to leave, theres still a section of my heart which wants him to stay here….out of pure admiration and beleife in the man which has done so much, but the question i keep asking myself…is has he got it in him to do any better? can he adapt to the way things are going….

if he truly could help us move forward….then of course….keep him…but i truly wonder if he can.

I see myself as a fair man, so, heres an Invitation i extend, if anyone has a rebuttal ARTICLE (not some bullshit post filled with ridiculous insults aimed at me) then send it through to arsenalaction@live.co.uk and we’ll post it on our blog.

Join our forum for more….

SORRY Arsene but its time to go!!!
[Podcast] Time for Arsenal to SACK Pat Rice and bring in a number 2 with balls.