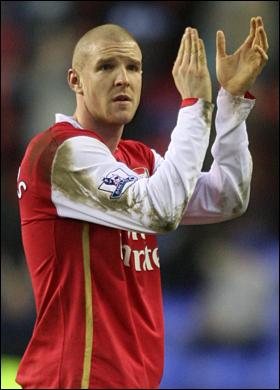 He signed for Arsenal in December 2002, though he remained at Servette until the following summer. The transfer fee was reportedly £2.5m.

His first season at Arsenal was plagued by injury But Big Phil made a name for himself in 2006 with Kolo Toure at the heart of Arsenal’s Champions League run which included a record-breaking run of ten clean sheets.

I was convinced that Senderos was a future Arsenal captain.

He was a very good young defender. Decent in the air, solid in a 50/50 tackle. Senderos was committed & professional for club and country.

However, Senderos suffered at the hands of Drogba & Torres and was blamed for everyhing..Senderos just could not handle the power of Drogba, time and time again Drogba would score and you would see Senderos walk off with his head down… But since Senderos what has changed? NOTHING.. Drogba is still doing the same thing to Silvestre,Gallas and Thomas Vermaelen. So Maybe it was not all his fault?

And in a Recent Poll on Arsenal Action, When asked who Arsenal fans would rather have out of Senderos or Silvestre? Senderos got 280 votes to Silvestre 28.

But Senderos was blamed for everything and in 2008 Senderos was sent out on loan to AC Milan and played 12 games, Returning to Arsenal he was overlooked behind Silvestre and was loaned out again to Everton…

During this time did Arsenal’s weak defence look more solid without Senderos? NO… High balls into the box vs teams like Blackburn, Stoke, Wigan and Bolton still a massive problem. EVEN without Senderos…

But for a player still only 25 he has been treated very badly by Wenger and been made to look like a Scapegoat.

Well now the Scapegoat has gone and i wish him all the best. I’m sorry to see him go.. Good luck Swiss Tony

Debate this more on the forum ( HERE ) www.arsenalaction.com

No doubt Silvestre will get a new deal at Arsenal now.