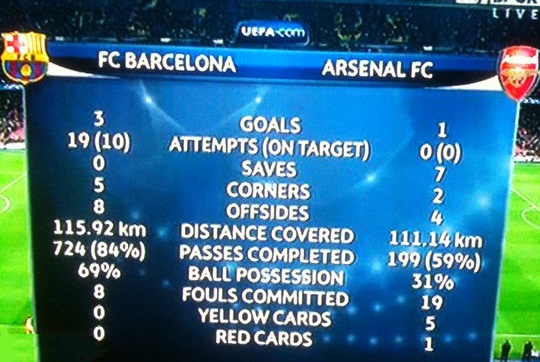 Last nights match was more one-sided than a stroke victim!

In fact Since Opta started recording stats for football matches in 2003, Arsenal last night became the first team to not register a single shot at goal in 90mins.

I understand that Barca are 1 of the best teams in the world etc etc etc, But Wenger didn’t really help with his tactics.

First off, Why was Rosicky picked ahead Arshavin?. And who was playing as our DM with no Alex Song? Diaby seemed lost and all over the place.

But for me the main error by Wenger was once Van Persie was sent off we should have got a forward on quickly and not waited for them to score 2 more goals and kill the game.

We were playing 4-5-1 and Van Persie was our lone striker, after he was sent off there was nobody up front to hold the ball up such as Chamack or Bendtner. We needed an outlet and a target up front. The ball just keep coming back at us and it was only a matter of time before the goals starter going in. Our players were winning the ball and had nothing to aim for. So the ball just kept on coming right back at us. We needed a player to work the Barca back 4 and give us some breathing space. WHY didn’t Wenger see this?

Yes Barca are a fantastic side, But come on you cant play 90mins and not have a single attempt on goal. What sort of game plain is that?. It was only due to poor finishing from Barca and some decent keeping that we were somehow still in the game in the 89mins.

Beating Barca away was always going to be a tough ask, but its the manger in which we played. We didn’t even have a go at them, please will say that there are so good. But maybe we are just really that bad.

Lets face it, We should of won the EASY group and never should of finished 2nd and played Barca at this stage in the first place. Again it was Wengers decision to rest players in games before the job was done.

So that’s the Carling cup final and the Champions done, Lets hope that this wonderful team spirit that Wenger keeps talking about can raise up and use this embarrassment to win the league.

Szczesny N/A
Sagna 6.0, [Defender well at times, but poor passing that put us under]
Clichy 6.5, [Decent game and defended well]
Kos 7.5, [At times he looked world class vs Messi, showed great pace, But lucky not to see red, at times clumsy]
Johan 7.5, [Played well and made some great tackles, but pulled all over the place by the movement of Villa]
Diaby 4.0, [NOT a DM player and didnt protect the back 4 at all, He may look like Vieira but he is nothing like him]
Rosicky 5.0, [Why was he picked in the first place? Gave us nothing forward or back]
Cesc 3.0, [A disgraceful backheel in a dangerous area before half time cost us the first goal and looked a confused all night. Sorry Cesc but you let us down big time, Where was our captain when we needed him the most]
Nasri 7.5, [Keep the ball well but nothing to aim for]
Wilshere 8.0, [What can I say, The lad played like a lion, Never gave up and was outstanding AGAIN!]
RvP 5.0 [Booked for a momenet of madness after he was grabbed around the throat, and sent off for kicking the ball away after given offside. Did he here the ref blow up? Only Robin can tell you that but lets face it he didnt look to upset about missing the target]

Subs
Almunia 8.5, [ Fantastic, made some great saves and was very brave]
Arshavin 6.0, [Should of started the game, looked up for it when he got on the pitch]
Bendtner 4.0, [Wasted our best chance of the night and the only chance we had to win the game, put thru by Wilshere and his first touch was just all over the place. If only we had Micheal Thomas on the pitch]

[Ratings] 0-0 Without RVP Arsenal are just “Really.Very.Plain”
[Ratings] Now we can concentrate on screwing the league up