[Ratings] Who needs Cesc when we have Ramsey 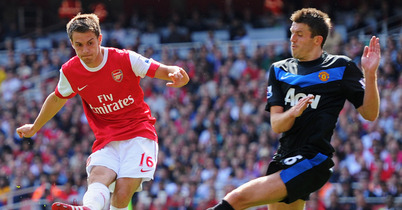 ﻿The story of Ramsey will be told for millions of years.  Career threatening injury through thuggishness, only to overcome it and become the greatest player in history of Earth.

Cesc out, Wenger went for Ramsey ahead of Denilson and Rosicky and it worked as the young welshmen scored the winner in the 56th min.

Szczesny 8.0 ( Outstanding, did everything asked of him and made some fine saves from Nani and Rooney)

Sagna 7.0 ( Very good defensively and made a great block in the first half. But poor with his final ball going forward)

Koscielny 9.0 (Fantastic and MOTM for me, Won everything and steped forward like Bobby Moore)

Djourou 6.5 (Played well but came off injured yet again)

Clichy 8.5 ( Pushed hard for MOTM, How are Arsenal even thinking about letting him go?.. Played Nani very well and pushed him back. A great game )

Nasri 6.0 ( Taken off injured at half time, starting to remind me of Hleb. Always wants to pass rather then shot now for some reason? )

Ramsey 8.0 (Started in place of Cesc and scored the winner. Always wanted the ball and gave it simple. Won his share of tackles. He and JW are our future in CM)

A Song 7.5 (Played Rooney very well and was solid, but gave away 2 many dangerous freekicks on the edge of the area)

Wilshere 7.0 (Missed a great early chance and his passing was off, but worked very hard for the team)

Van Persie 7.5 (Lead the line well and linked the play, needed support in the 2nd half but always dangerous and set up the goal)

[Ratings] Wenger do the right thing and walk away.. NOW!
[Funny Video] Arsenal fan’s reaction to our season falling apart