[Ratings] WENGER OUT! Only has himself to blame. 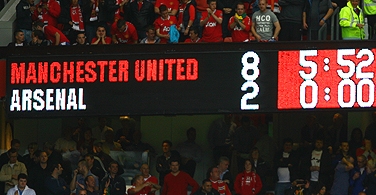 For people who have followed this blog or us on Facebook or Twitter over the years you will know that this isn’t a knee jerk reaction.

Arsene Wenger has to be sacked and NOW!!!

This has been coming, ALL of the clubs own making shambolic management by board & manager this summer.

How is Arsene not embarrassed to put out that squad out today is beyond me!

£100m in the bank and yet Arsene is trying to sign players on the cheap. But dont worry we’re signing the South Korean Captain for £3m, this kind of statement of intent will sort it out

The facts are the facts. Statistically that translates to 35 points over the course of a 38 match season. 35 points gets you relegated.

The way we have handed the transfer in and out this summer have been nothing more then pathetic.

We all knew that Cesc and Nasri wanted out, why didnt Arsenal address this weeks ago and not at the start of the season leaving us only a week to sign replacements. Now we only have 3 days to somehow find the right players. Its not going to happen. We we are going to get is panic signings like Park Young!!!

And then Arsene will tell us that “We did everything to sign players” Well if bidding £6m for Gary Cahill is doing everything then sorry this just proves how clueless he is. We have faffed around in the transfer market for YEARS!  How many players have we missed out on due to Wengers pennypinching ways?

We dreamed about signing Benzema, Kaka, Mata, Hazard and Cahill.. And what did we get? Cheap replacments and kids.. Same old Arsene!

This is along time coming and now its clear that Arsene knows only 1 thing, and thats how to make a profit. Cesc gone, Nasri gone, Clichy gone, Eboue gone, £100m in the bank. 3 days to sign replacements.. We are a joke!

With all that in mind and with everything thats gone on since 2006… ARSENE WENGER HAS TO GO!!

Ratings
Szczesny 4.5 ( His back must be hurting by all that picking the ball out the net. made a few good saves, felt sorry for the kid )
Traore 3.5 ( Was all over the place, not a good time to get a start in the first time. Looks like he needed games )
Koscielny 4.0 ( Looked the 2nd div defender he was. all over the place ala Stepanovs )
Djourou 1.0 ( What can i say, He has been poor for a long time and today was just a joke. 1 of the worst defenders I have seen )
Jenkinson 2.5 ( And people said Eboue was bad. All over the palce and sent off )
Rosicky 3.5 ( Give him a new deal, what a joke )
Coquelin 6.5 ( Credit to the kid, came in and played well and with heart, taken off and it all went tits up)
Ramsey 5.0 ( Feel sorry for him. Not a Cesc and not got the players around him to shine )
Walcott 5.5 ( He tried his best and scored a goal but is his best good enough)
Van Persie 5.0 ( Missed a pen and didnt look up for the game, scored late on and needs to play in a 4-4-2)
Arshavin 3.5 ( Clueless and lucky to not to have been sent off )