[Ratings] Wenger do the right thing and walk away.. NOW! 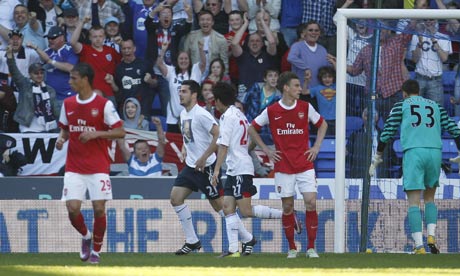 Its a shame it has come to this!

He should of  gone down in history as our greatest ever manager. BUT he only has himself to blame, Wenger needed to sign players during the last transfer window if we were to win anything.  He didn’t and now just like the last 6 seasons our season falls apart.

No fight, no passion, no “mental strength”…

Wenger has already said that he wont be going mad in the transfer window this summer and wont be making changes. So with that in mind I now say that Arsene should do the right thing and step down as Arsenal manager.

Its clear that he has lost his mind if he thinks that this bunch of players are good enough to win anything at Arsenal.

But according to Arsene this is the greatest bunch of players we have had in 15 year, the man who said that finishing 2nd was a successful season. Well Arsene we aint going to finish 2nd. If anything we are now going to finish 4th, but at the end of the day YOU are happy.

On todays game it was much of the same, more set-piece goal and refusing to test the keeper and wanting to score the perfect goal.. When will we learn ?

This season hasn’t been a disaster.. Its just been a totally playback of the last TWO seasons. And like before Wenger didnt address our problems during them summers so that is why Im sure nothing will change at Arsenal this summer if Arsene is still at the club.

Ratings
Szczesny 8.5
( Saved the pen Davies and made some decent stops from Lee. Not much he could do with both goals, let down by the defenders in front of him )

Sagna 6.5
( Didnt have a great game, was poor going forward and not convincing at the back )

Djourou 3.0
( Was all over the place, slicing everything, diving in, weak, giving the ball away, gave away the pen, didnt go with Cohen for the winning goal. This is why I wanted Wenger to sign a CB in the transfer window. Not good enough )

Koscielny 6.0
( Not convincing in the air and not strong enough for games like Bolton, Stoke, Blackburn etc )

Clichy 5.0
( So poor with his final ball its almost funny )

Song 4.0
( I lost count how many times he gave the ball away in the first half, gives away 2 many free kicks and doesn’t give the back 4 any protection )

Fabregas 7.0
(Unlucky not to score when he hit the post in the first half, Passed the ball well but he is no leader )

Wilshere 7.5
(Played well today, got stuck in and passed the ball well, I just wish he would shot when given a chance )

Walcott 6.5
(Started well but then differed out the game )

Nasri 5.5
( Missed 2 big chances to win the game and didnt look his normal cool self )

Van Persie 8.5
( 17 goals in 17 games, scored a world class goal and looked the part in the 2nd half when he dropped deep of the striker )

Subs:
Ramsey, N/A
Arshavin, 6.5 (Ran at them and looked dangerous )
Chamakh 4.5 ( I give up with the lad, 2 chances to test the keeper and went for the pass, not a finisher and needs to go in the summer )

[Ratings] What mental strength are you talking about Arsene?
[Ratings] Who needs Cesc when we have Ramsey