[Ratings] Time for Arsene Wenger to walk away 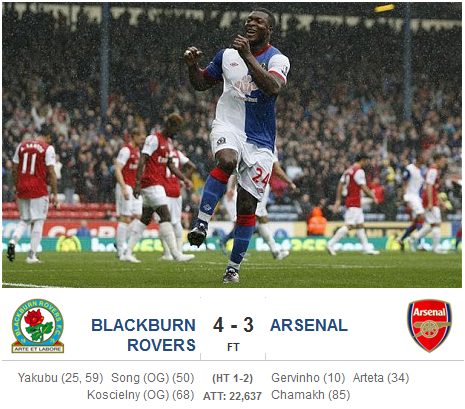 Yet another painful embarrassing defeat and yet another show of comedy defending by Arsenal under Arsene Wenger.

But for me the only person to blame is our manager.

We all know that Arsene is untouchable at Arsenal!.. The board will never sack the man who’s makes mega money and refuses to spend and is happy with finish in the CL place.

Wenger had all summer to address our weaknesses. But instead he faffed around in the transfer market and left it all till the very last moment and signed panic players.  Now we have played 5 games into the season and have 4 points and the worse defense in the league.

After losing 8-2 to Man Utd I didnt think it could get any worse, but 2 own goals and schoolboy defending showed its going to be a long and painful season. Will Arsenal now refund the poor away fans AGAIN!

Arsenal need a lot of this.

Fresh ideas, fresh tactics and most of all… a new change in management!… Arsene is never going to be sacked so thats why I say that Arsene should do the right thing and just walk.

He should of been remembered as our greatest manager. But now he is going down faster then the titanic and will be remembered as a manager who couldn’t address our problems and went 6 years without winning anything and turned a double winning team into a team fighting for 4 place (At best)

His project and principles are killing this club. His tactics of 4-5-1 is clearly the main problem but he is refusing to change.

We wanted Gary Cahill, Mata and Hazard. Wenger didnt want to pay that little bit extra and I hope now he is proud of himself.

Add to that the way he has handed the transfer dealings sums up that Arsene has lost the plot and we need change at Arsenal NOW! … The Wenger OUT page on Facebook now has over 1100 people LINK

Szczesny 6.5 : Nothing he could do with any of the goals. Made a few good saves.
Sagna 5.5 : Roasted by the Blackburn winger
Mertesacker 4:5 : Ive seen tanks turn faster. Slow and couldn’t handle the overweight Yakubu.
Koscielny 3:0 : Mr Panic had a terrible game and finished it off with an own goal.
Santos 7.5 : First start and played well. Put in a few decent balls towards the end that Mertesacker and Chamakh should have scored from.
Song 7.0 : Played well and set up the first goal but didnt look alive when defended and scored an own goal.
Arshavin 6.5 : Played well and had a decent impact on the left wing.
Arteta 8.0 : Scored his first goal and was at the heart of everything good.
Ramsey 7.0 : Set up Arteta for his goal and played some nice passes.
Gervinho 5.5 : Scored early and then got 2 cocky and didnt want to pass. Greedy and frustration.
Van Persie 6.0 : No support at all and only looked dangerous when we went 4-4-2. Set up Chamakh’s goal.

Subs
Walcott 7.0 : Looked very dangerous with his pace and put in 2 fantastic crosses.
Djourou 2.0 : The Arsenal clown, slipping all over the place, going to ground and crossing into row Z.
Chamakh 6.0 : Scored 1 great header and then missed an easy chance at the death to make it 4-4