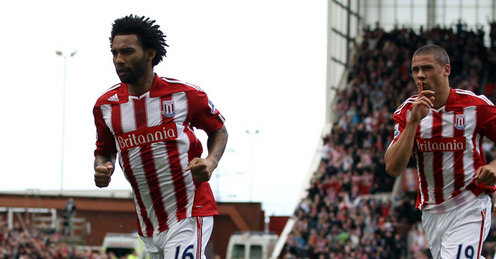 You just knew it was going to happen.

After beating Man Utd last week you just knew we would lose to Stoke today and like clock work poor defending put an end to our season.

I really hope that next season Wenger changes our team formation and tactics.

We are just dreadful. Sideways passing and one unorthodox forward just does not work. At half time and 2-0 down Chamakh & Bendtner came on but we still played the same way. RVP dropped deep into the Cesc/Ramsey role and Bendtner was again asked to play on the wing with Chamakh up front.

Its not working and we need to go back to 4/4/2 ASAP…. With all the ball today it took us 75mins to final test the Stoke keeper.

So now we need 4 points from the last 2 games to make sure we get 3rd spot.

Well done Arsene, happy with 2nd was you and if you would have known Vermaelen was going to be out for such a long time you would have signed a CB?. No more excuses Arsene, You need to sign decent players NOW and have a massive clear out.

Wenger said a few days ago that “When you sign a player you KILL a player”.. Well if thats the case then kill Almunia, Eboue, Djourou, Denilson, Rosicky, Diaby, Chamakh this summer…. But I doubt anything will change.

Szczesny 6.5 (Nothing he could do with the 1st or 3rd. But after getting  a hand to the 2nd he should of saved it)

Sagna 6.0 (Allowed Pennant to turn for the 2nd goal. Didnt have a great game going forward or at the back)

Koscielny 7.0 (Our best defender on the day. Didnt do much wrong and was let down by players next to him)

Djourou 3.5 (After he poor show vs Bolton and coming out with comments like “Wenger was right not to sign a defender” he really let himself down again today. Lost Jones for the first goal. Backed off Pennant for the 2nd goal and his poor attempt to clear the ball for the 3rd goal was just a joke. Sorry Johan but you are not good enough and Wenger needs to sign a CB in the summer fast)

Gibbs 5.0 (If what we read is right and Clichy will be sold in the summer then we need to sign a LB as this lad isnt ready at all, Weak and defensively all over the show)

Song 4.0 (His passing is just awful, i lost count how many times he gave the ball away. And we are playing with 5 in midfield and he is the holding player. He gives us no protection at all, We need a hard ball winner this summer)

Wilshere 6.5 (Showed heart but at times got involed in stuff he didnt need to. Nasty tackle on Pennant and its only a matter of time before he breaks a leg)

Ramsey 5.0 ( Was very poor and taken off at half time)

Walcott 4.0 (Forgot he was even on the pitch in the 2nd half. The game passed him by and when he did get the ball he lost it)

Arshavin 5.0 (Taken off at half time and Wenger tried to bring some height onto the pitch)

Van Persie 7.5 (Scored his 20th goal of the season. Where would we be without him. Feel sorry for him at times. No support in this 4-5-1 bullshit)

Chamakh 5.0 (Miss hit his only chance, Ive seen 5 year old with more power in there shooting)

Bendtner 6.5 (Came on and played on the left wing. And fair play to him he looked dangerous but needs to play in the middle next to RVP)