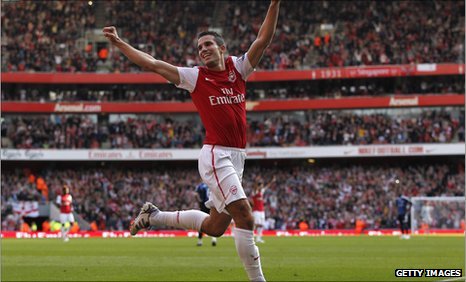 What a game!! … Im still buzzing, proud of the players and the heart they showed today. I can wear the shirt with pride for a change and it feels fantastic… ARSENAL ARE BACK!!

Robin van Persie’s hat-trick inspired Arsenal to an incredible victory against Chelsea as their recovery gathered momentum in a Stamford Bridge thriller.

Frank Lampard had headed Chelsea in front after 14 minutes but, in a game strewn with defensive errors, Van Persie put Arsenal back in contention from Gervinho’s pass.

John Terry made it 2-1 before Andre Santos equalised and the outstanding Theo Walcott put Arsenal ahead for the first time before Juan Mata’s spectacular strike set up the finale to an enthralling encounter.

Terry lost his footing to allow Van Persie to race clear for Arsenal’s fourth after 85 minutes before the Netherlands striker completed a second treble against Chelsea by hammering his third past Petr Cech deep into stoppage time.

Arsenal Ratings.
Szczesny 7.5 ( Made some great saves and came and punched when he needed to, Got booked and could of seen red for a rash moment of madness)
Mertesacker 6.0 ( Poor defending to allow Terry to score, but overall a decent game )
Koscielny 8.0 ( Outstanding and playing very well, Didnt give Torres a sniff all game )
Santos 7.5 ( Scored the all importance goal early in the 2nd half, Started the game poor but got better towards the end and very impressive in the 2nd half )
Djourou 5.5 ( Slipping all over the place and was weak) replaced by (Jenkinson 75)
Arteta 7.0 (Controlled the game with neat passing )
Walcott 8.5 (Maybe his best game for Arsenal, ripped ashley a new arsehole..”OHH”..replaced by (Rosicky 79)
Ramsey 8.0 ( Very impressive, the more games he plays the better he looks )
Song 6.5 ( broke up the play well but gave away countless dangerous free kicks for rash tackles )
Van Persie 9.5 ( 3 goals and MOTM, Arsenal have to keep him. The man is just class)
Gervinho 7.0 ( Missed a sitter but worked hard for the team and had a hand in most things (Vermaelen 88)