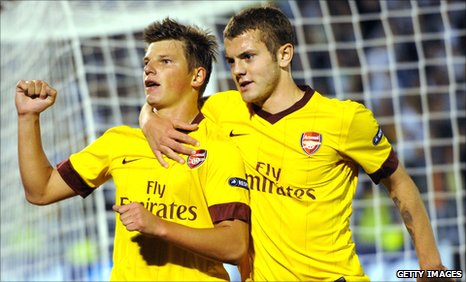 Andrey Arshavin fired Arsenal ahead before Cleo levelled for Partizan with a penalty after Denilson’s handball.

Marko Jovanovic was sent off for a foul on Maroune Chamakh in the box, but Arshavin missed the penalty but Chamakh made amends with a header.

Fabianski : 9/10 (Great night for the young keeper. Super pen save and then his confidence grew. Didn’t put a foot wrong) Man of the match
Sagna : 6.5/10 (Pretty solid at the back but wasteful with his crossing)
Squillaci : 7.5/10 (Poor start to the game and weak header back, But 2nd half was super and scored a fine header)
Djourou : 6/10 (Very poor start to the game and almost cost us when he was bulled off the ball, But better 2nd half)
Gibbs : 6/10 ( Not a great night for the young LB, Gave away a soft pen)
Rosicky : 7/10 (Super cross for the key 2nd goal, worked very hard )
Denilson : 6.5/10 ( Gave away the first pen for handball, made a great tackle in the first half )
A Song : 6/10 ( Very confused to what his role was tonight? Seems to be going forward alot and giving the ball away)
Wilshere : 8.5/10 (Great game, Set up the first with a amazing bit of vision and keep the ball well, Was kicked all over the park)
Arshavin : 6.5/10 (A very up and down night for the little russian, Scored the first then missed a load of chances and a pen)
Chamakh : 7.5/10 ( Worked very hard up front and scored the key 2nd, Also won the pen)

Arsenal made WBA look like AC Milan
[Ratings] Same SH#T!!! But we have £56m in the bank