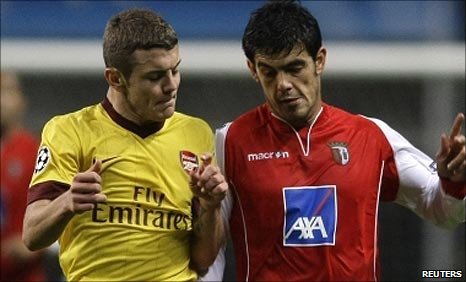 And it was all going so well in the champions league.. But 2 away defeats in a row have put our  hopes of qualifying for the Champions League knockout stage in doubt.

Well that’s what you get for resting players… But we had an easy group right?

Tonight we were just awful? Cant remember the Braga keeper having to make a decent save in the 90mins? No support for the striker. We gave the ball away countless times and deafened like a park team… But whats new?….Tonight again proved that the current 4-5-1 tactics is NOT working. This 4-5-1 Is just nonsense, how many times do we get hit on the counter attacks. The idea of playing 4-5-1 is so the back 4 get protected? Its pointless. Our striker has no support and our back for dont get protected. SO WHAT IS POINT!!!!

Certain players like Denilson, Djourou, Gibbs are not good enough and are well overrated…And it proves that our manager is clueless and needs to go…£200m in the bank and Wenger and the board are happy… Do they really care?

I feel sorry for the travelling gooners again, will be the same ones who were at shaktar away too..All that way to watch the team play with no heart of passion.

No doubt Wenger will blame the ref for not giving us a pen at 0-0 ..But Arsene. Dont you think this might have something to do with our inability to shoot on goal?

Debate this more on the forum www.arsenalaction.com/forum/