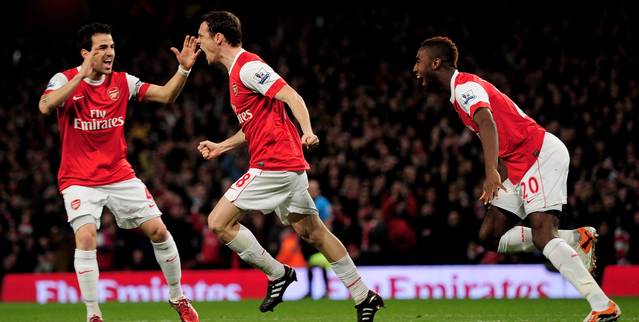 Arsenal beat Stoke to move within one point of Manchester United at the top of the Premier League table.

Sebastien Squillaci headed home after some nice work by Bendtner, but the win was tarnished by concern over captain Cesc Fabregas and Theo Walcott, who both came off injured.

Szczesny 8.5 [Didnt put a foot wrong, Made a fantastic save to stop Carew, Clean sheet and gave confidence to the whole team] MAN OF THE MATCH *

Squillaci, 7.5 [Scored the all importance goal and was solid at the back]

Clichy, 7.0 [ Good game by the flying fullback, keep the dangerous Pennant at bay]

Fabregas, N/A [Started the game very well but came off after only 15mins]

Song, 6.5 [Didnt have a great night, looked slow and gave the ball away a few to many times]

Wilshere, 8.0 [Our best outfield player on the night, didnt lose the ball and at the heart of everything good]

Walcott, 7.0 [Started the game very brightly, hit the post and looked on top form. But his injury looked pretty bad, I fear he may be out for sometime. Gutted because his pace worries Barca and we need that on the counter]

Bendtner, 7.5 [Lead the line very well and again he set up the goal with some fine work]

Nasri, 7.5 [ Played very well in the Cesc role. Took the armband and looked up for it]

Subs:
Denilson, N/A
Arshavin, 7.5 [Played well, Looks to be back to his best]
Chamakh, N/A