[Ratings] Arsenel & Wenger Bottle It In The Final 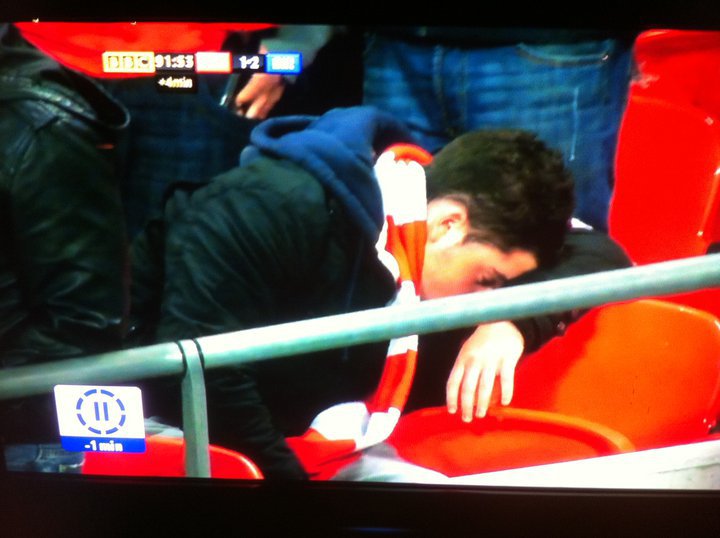 Self destruction and a lack of bottle!!

This team has no bottle and never will!…Bottle isn’t found or something you can give players, it isn’t learned!! You either have it or you don’t and only Jack Wilshere showed it today.

Wenger speaks about the great mental strengths and spirit of this team, but where is this when we most need it?.. at the tail end of last season when we could of gone on and won the league we fell apart. And today, the chance of WINNING something and putting an end of 6 years of hurt vs a team 16th in the league and of course.. WE BOTTLE IT!!

Wenger had a nightmare today, why did Rosicky start in the Cesc role and not Nasri? and also his subs didnt make us stronger they weakened the team.. Even with 2 stikers on the pitch Wenger moved Nic to the wing and played 4-5-1? WHY?

Nothing will change at Arsenal until (A) Wenger leaves or (B) starts spending the cash of quality players (Not players like Chamakh,Koscielny & Squillaci.

A sad day for us fans, But its nothing new… I really wouldn’t blame Cesc & Nasri if they quit the club at the end of the season.

Szczesny 5.5 [ Big game for the young man and he didnt cover himself in glory]
Sagna 4.5 [Gifted the ball away for the first goal and had an overall poor game]
Clichy 6.0 [Worked hard but didnt have anything positive on the game]
Djourou 3.5 [Terrible game, left his man (Zigic) for the first goal, lost his head for the 2nd goal]
Koscielny 3.5 [The new Gus Ceaser, What was he doing? CLEAR THE BALL!!.. £8m on a 2nd division CB and at times he looks it]
Song 2.0 [ The worst game ive seen Song play in years. Looked slow and gave the ball away so many times. I cant see how this guy is the best DM player at a club like Arsenal]
Wilshere 9.0 [The only Arsenal player who put in 100%. worked his socks off and had a great game. Didnt give the ball away and at the heart of everything good]
Rosicky 3.0 [Has stole a living for the past 5 years and when he is fit he is gash!.. Why did Wenger play him in the middle and not Nasri?]
Arshavin 6,5 [ Worked hard and set up the goal for RVP]
Nasri 7.5 [ Tested the keeper with some powerful shooting. Should have played in the middle]
Van Persie 8.0 [Scored a world class volley before coming off.. Lets just hope its nothing major]

Debate this more on our forum www.arsenalaction.com/forum/