[Ratings] Arsenal prove a point and take all 3 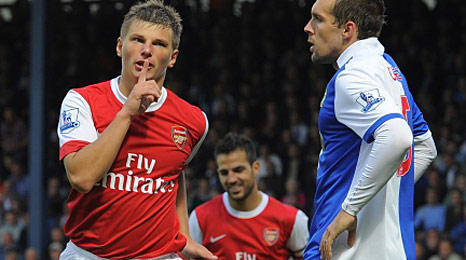 A massive 3pts for the gunners and I take my hat off to the players on the pitch today. The did what was needed and showed heart and fight and hung on at the end and won the game.

Almunia : 8/10, Full credit to Almunia today. Made a few good saves and when he needed to come for balls he did.

Koscinely : 6/10, At fault for the blackburn goal and didnt show enough strength or pace to deal. Apart from that he did ok

Fabregas : 6.5/10, Didnt look fit, passing was all over the place. But he needs playing time.

Song : 7/10, Battled for the team and won the ball back. But his passing at times is very poor.

Walcott : 9/10 [MOTM] For the 2nd week in a row, Man of the match. Great goal and great start to the season. A real handful who they couldn’t deal with.

van Persie : 6/10, Set up the first goal and then the glass ankles did what they always do. Went off injured after 30mins.

Arshavin : 7/10, Was pretty poor, but then popped up in the box and took his goal well. After that he looked up for it.

Wilshere – 6/10 Replaced Arshavin ( Should have scored to kill the game off. Keep the ball well)

Chamakh – 7,5/10 Replaced RVP ( Worked the line and his link up play was world class)

Negative from the match

Van Persie injured yet again, in his first game back he lasted 30mins. How many times is this going to happen. Hope its not long time. Wenger said after the game it was only a few wks.

Positives from the game

The team showed they could mix it and fight. A real test for the boys today and we didn’t hide. We looked well up for the fight and it was great to see.