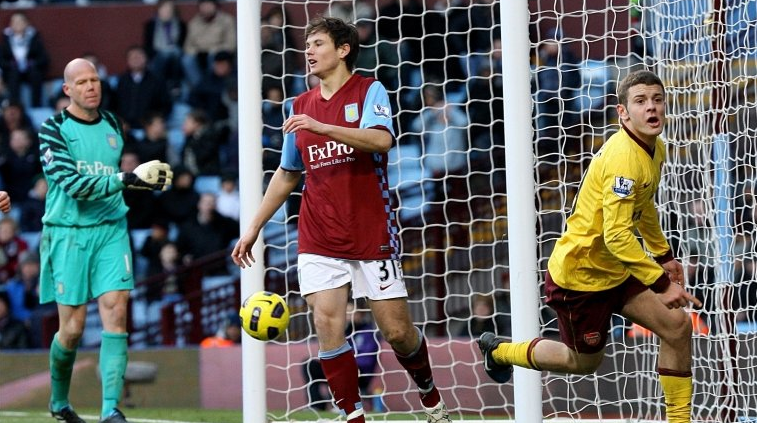 Arsenal held off a spirited Aston Villa comeback to earn a victory which puts them top of the Premier League.

2 – 0 up at H/T is never going to be good enough to win a game for Arsenal.. And when Villa hit back early and made it 2-1 visions for a Spurs comeback looked a certainty. But today we showed some great fight and seemed up for it. Maybe it was losing to spurs last week or the Champions league defeat but some players looked like a different animal today… and all this without Cesc.

Clichy,Koscielny at the back… Young Wilshere ticking things along and the dangeros Arshavin and Nasri supporting Chamakh. Today we had good balance and looked very good on the counter. The 4-5-1 is much better away from home and today proved it.. Happy days, top of the league.. lets enjoy it

Fabianski  6/10 : Didn’t have much to do, Couldn’t do much about both goals.
Sagna  7/10 : Played well today, Good defensive work and loads good attacking play.
Clichy 7.5/10 : Back to his best, Very good game vs the pacy Young, Clichy pushed him back and won the battle.
Squillaci  7/10 : Much better this week, pretty solid.
Koscielny  8/10 : For me thats his best Arsenal game. Got cut early and showed great pace and was brave in the air.
Song,  6.5/10 : Keep the ball well and worked hard. A bit sloppy with his passing.
Wilshere  8/10 : Dont think he gave the ball away in 90mins. Showed great workrate and skill, Nice head to win the game.
Rosicky 6/10 : Didnt have a great game. 2 good chances early on missed and was abit wastful with his passing. But worked hard and won some good tackles
Nasri 7.5/10 : Scored a wondeful goal on the volley. Our best player all season and was great today.
Arshavin  9/10 : MOTM for me.. The little man was back to his best. Scored a fantastic first goal, set up the 2nd and was our most dangerous player.
Chamakh  8/10 : MUCH better… Wasnt scared to shot and looked up for it today. Mourinho “How can Wenger NOT win anything since 2005”
Who is the best man to replace Pat Rice at the end of the season?