[Ratings] Arsenal BOOOOOOED off the pitch and rightly so 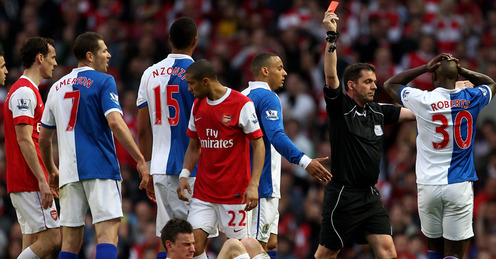 Another milestone achieved today, that was Blackburn’s first away clean sheet of the season.

Arsenal going for the title, but yet no speeriiiit and no mental strength. Something our Manager keeps telling us how much this team has.

60,000 plus pay good money to watch every home game, we deserve more from the board and wenger.

Good on the fans for BOOOING the players off the pitch today, good luck on the season ticket hike next year.

Arsene is destroying this club & has failed with this experiment. If Wenger is going to stay at this club his mentally needs to change and fast.

We need to have a massive clear out this summer, tactics need to chance and Wenger needs to sign real players of quality and not 15 year old kids and heartless players who crack under pressure.

Wengers tactic today was just comical. He bringing on 2 CF’s and taking off 3 wide men and moves RVP and Nic out wide still playing the same 4-5-1. If you are going to bring on Forwards then play them up front and not on the wings FFS!

Blackburn had 10 men for the last 15mins but we still played the same style as what we started the game. Why not stick 2 strikers down the middle?

If Arsene doesn’t make wholesale changes in the summer then the fans need to make a stand because this has dragged on way to long.

The new kit thats coming out this summer? Boycott it in protest of the way the club is being run. Wenger needs to know that we are angry and things need to change.

Our season is now over. We will never win any respectable trophy ever again with Wenger in charge. Anybody that starts talking rubbish to me about how close we were to winning the quadruple is clueless. The turning point of the season was the day the transfer window shut and Wenger didn’t invest and strengthen the team.

But whats new?…..In Arsene we rust

Ratings
Almunia 4.0 Clean sheet but tried his best to lose the game for us but he even managed to f**k that up!

Sagna, 5.0 I lost count how many times his hit the first man with his crossing. Very poor defensively also and thats his stong point. In games like this I would play Eboue.

Squillaci, 7.0 He had a decent game, what I mean is he didnt make any mistakes that they scored from.

Clichy, 7.5 Good game, worked hard down the left and put in some dangerous crosses with his right foot?

Song, 6.5 it was good to have Alex back, only because Denilson and Diaby are so poor. Booked again and lucky not to see Red for countless stupid fouls.

Wilshere, 7.5 Worked hard for the team but missed our best chance of the game.

Walcott, 7.5 Great to have the lad back, We have missed his pace and drive down the right.

Nasri, 7.5 Took a nasty blow to the head and didnt look himself after that.

Arshavin, 8.5 Our best player until Wenger took him off? Was testing the keeper and made a great tackle and worked hard for the team.

Subs Chamakh,Bendtner,Cesc (Didnt change our playing style at all)

[Inspiring Video] Arsenal – March 2011, Down But Not Out
Arsenal fans MUST Boycott the new kit & season ticket renewals