[Ratings] Arsenal (B) flop again vs the lower league teams 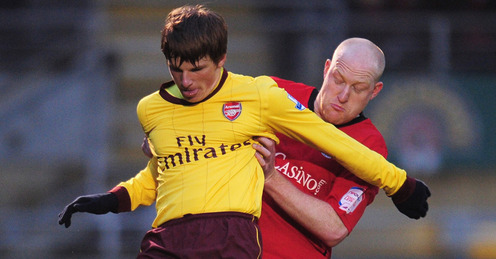 Its scary.. This is the same bunch of player who LOST to Braga and Ipswich.. And also failed to beat Leeds Utd at home.

So its clear to say that our B team is really quite poor as today proved.

The worst result we could of got today was a draw, we really dont need more games at the mo. We already have enough on our plate. Thats why I was so disapotined that we didnt finish the game off today.

At 1-0 it was always going to be a tight game, and with 2mins to go Almunia is asked to deal with the only shot on target and it went under him.

But aside from that we were very poor. Cant remember the Orient keeper making 2 many saves during the game.

This bunch of players on show today have failed so many times this season. Wenger is giving them a chance to shine and its almost like they cant be arsed.

Well played Leyton Orient, You got your dream tie vs The Arsenal and you gave everything. Our boys just couldn’t give a sh#t. I just hope that the Carling Cup final next weekend will have the likes of RVP, Nasri,Walcott, Wilshere and Cesc and none of the below as they don’t deserve to play in a final

Almunia : 4.0 [Nothing to do all game until the 88th min and the only shot on target he couldn’t deal with, its no wonder we couldn’t even give him away for nothing. Im just amazed this clown was the Arsenal number 1 for 3 seasons]

Sagna : 6.5 [Decent game but was very wasteful with his crossing.. I’m sure Ive said that before]

Miquel : 8.0 [Looks a very talented player. Very good on the ball, good pace and showed some vision with a fine 50 yard pass to Nic]

Squillaci : 7.0 [Great block with his face, but looks slow and sluggish vs very basic player]

Gibbs : 5.0 [Weak for the goal, Didn’t give us anything down the left apart from a good cross to Chamahk who missed]

Song : 6.0 [Played more forward in the Cesc role and allowed Denilson to sit, But poor passing and didnt have the pace to support the forward]

Denilson : 5.0 [Yet again he let us down vs the lower league teams, Poor passing poor tackling, slow, I cant see what he brings to the team]

Bendtner : 7.5 [ Set up the goal with a decent cross, the thing I like about Nic is that he is always willing to have a shoot at Goal and has the power to test the keeper. Didnt have the best of games but worked hard]

Rosicky : 7.0 [Scored his first goal since Jesus was born, Nice header but not a Nasri or a Cesc]

Arshavin : 8.5 [Worked very hard for the team and at the heart of everything good – MOTM]

Chamakh : 3.0 [Missed a sitter from 5 yards and not the first time this season, Very poor show again. Lacks pace, dosent have the power in his shooting to test the keeper.  Seriously we had better hope that RVP stays fit because we look a totally different team with Chamakh leading the line ]