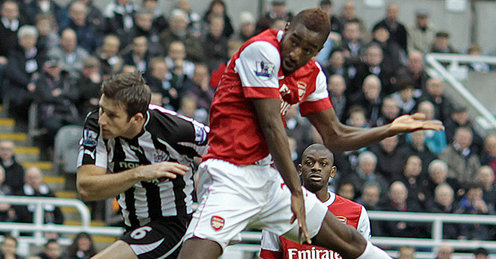 In all my years of watching the Arsenal I have never seen a game like this. 4-0 up after 25mins and looking world class.

But unfortunately for Arsenal a game of football lasts 90mins and we blew it. Early in the 2nd half Djourou came off with an injury and for me THAT was the turning point. Squillaci came on and all the panic came in.

Daiby was stupidly sent off for lashing out on Barton and it was the Alamo as newcastle bombarded us with everything. But 4-0 up we somehow managed to fck it up as the toon came back to draw 4-4.

Yes you can blame the ref Phip Dowd who was very poor and gifted Newcastle a soft pen. But Wenger and the team need to take this on the chin.

All games we have been winning and looking in control and somehow managed to throw it away.

You can blame the ref all you want, sad fact is that a Championship winning side never loses a 4-0 lead.

A disgraceful show by the players and manager today

Szczesny, 8.0 ( Made some fine saves, Not at fault for any of the goals. Let down by weak defending)

Sagna, 6.5 (Set up our 4th goal with a fine run and cross, defensively poor)

Koscielny, 6.0 (Great first half, very poor 2nd. Gave away a very sort pen and then he was all over the place)

Djourou, 7.5 (Scored a great header and was looking good, Limped off just after half time and our defense went to pot)

Diaby, 4.0 ( Stupid red card for lashing out on Barton, Yes it was a back tackle by Barton, But you cant raise your hands like that. Down to 10men it was always going to be harder to handle the comeback)

Cesc, 5.5 ( Poor game and a poor show by our captain. You would of liked Cesc to grab a few people at 4-1 or 4-2 and shout at them and tell them to put there finger out. But he didnt. At times like this you need a leader of men. Tony Adams, Vieira.. Cesc was walking around feeling sorry for himself)

Wilshere, 7.0 ( Played well, His best game for a long time, Let down by players behind him)

Walcott, 8.0 (Unplayable for 25mins, Fantastic start to the game, But along with the rest of the team,didnt show for the 2nd half)

Arshavin, 7.5 (Set up the first 2 goals and looked to be playing well. But 2nd half was pretty weak)

Van Persie 7.5 (Scored 2 fine goals but 2nd half had no support)

Squillaci, 4.0 (Came on and we looked a different side. isnt this guy a experienced international defender? to me he is no better then Senderos or Silvestre, Very poor defensive play)

Debate this more on our forum www.arsenalaction.com/forum/

[Video] Szcezney’s dad punching Roberto Mancini in the face
What is the point of Tomas RoSICKy?