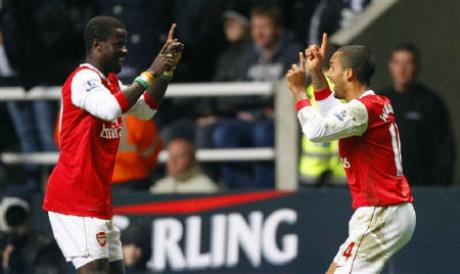 First and foremost a brilliant defensive performance by Arsenal which provided a platform for the goals later on.

The defence was impressive and is really starting to take shape. Koscielny seems to have come back stronger, Djourou is growing in confidence and strength, and Szczesny was a brick wall.

Szczesny – 9.0 : A perfect game. Fantastic saves, aerially dominant, perfect distribution. He was brave and strong and deserved a clean sheet. Second choice, for me, on Fabianski’s form. Manuel who? (MOTM)

Djourou – 7.5 : Had an excellent game, had a few problems at some points getting caught for pace, but enjoyed a spell of dominance in the last half hour where he really had to be on his toes.

Koscielny – 8.0 : Was a brick wall for us. Timing of the challeneg is fantastic and made crucial tackles throughout the game. Several key blocks, including once on an open goal. Szczesny owes him his clean sheet.

Gibbs – N/A : Really didn’t get enough time on the pitch to make an impression. Came of injured which is so disappointing, as this was another chance to shine. Hopefully it’s nothing major.

Eboue – 7.5 : Had a good game, especially given the majority of it had to be played on the wrong side of the pitch. Took over for Gibbs and was impressive in defence. Stayed sharp right to then end when he was of great help to the keeper.

Eastmond – 6.5 : Composed and mature performance, some well timed tackles. But a disciplined game.

Rosicky – 7.0 : Didn’t impose himself on the game in the playmaking role he was intended for. Not a bad game, but didn’t impress as he has in recent weeks.

Denilson – 7.0 : Was the invisible man, but in a good way, really. Disciplined performance and shielded the back four well. Cycled possession to the more attacking players very well.

Walcott – 8.5 : Two goals, two clinical finishes. Showing his ability through the centre, however didn’t have a great game out wide, his crossing was off all day.

Vela – 6.0 : Had a bad game, to be honest, perhaps a 6 is generous. Offered nothing all day, and lost the ball a lot through sloppy running and passing. Time for Vela to start showing his worth!

Bendtner – 8.0 : Scored a brilliant goal from as good a strike as you’ll ever see. Lots of fans question his finishing, and yes, he smacked a few straight at Krul, but with shots like that he’ll get better and better.

[Ratings] 3-0 Fantastic Fabianski,Who needs CASH when you have CLASS
[Poll] is Bendtner a better finisher then Chamakh?