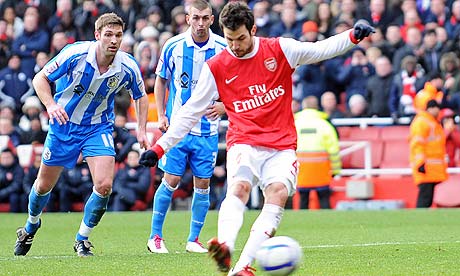 Again it was the captain Cesc Fabregas who came off the bench and converted the late spot kick, after Huddersfield pushed everything forward vs the 10men gunners.

Ratings
Almunia : 6.5/10 (Not much he could do with the goal. But looked a broken man. Confidence very low)

Squillaci : 3.5/10 (Welcome back, first game back and he looked rusty. Sent off for a rash tackle.Very poor)

Eboue : 7.5/10 (Bombed down the right wing and gave us loads going forward.Decent game )

Diaby : 6.5/10 (Frustrating player, all the skill in the world and does the hard work and then gives the ball away, first game back and looked weak towards the end.. Subbed (Fabregas 69 yellow card)

Nasri : N/A (Picked up an early knock and was replaced by Rosicky, Lets hope it isn’t bad..(Rosicky 6.0/10 Pretty poor, wasteful with his passing)

Denilson : 3.5/10 (Disgustingly poor, weak on the ball, slow tracking back and his passing was off. Very poor game)

Arshavin : 6.5/10 (Worked hard, but you can see his head it not right. A few good runs but wasteful with his final ball. Made a great tackle in the 2nd half that stopped a certain goal)

Bendtner : 6.5/10 ( Missed 2 great chances early, but he keeps going and had a hand in the first goal and worked hard in the 2nd)

Man of the Match : Koscielny