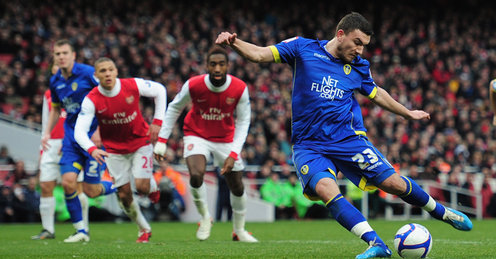 An 89mins Penalty saved Arsenal blushes to draw Leeds 1-1 in the third round of F.A. Cup. Cesc Fabregas came off the bench and scored with a penalty kick in the 90th minute to give Arsenal the draw at the Emirates Stadium. lower league Leeds had gone in front on a 54th-minute penalty from Robert Snodgrass.

Overall some of the Arsenal fringe players failed yet again to take there chance, and not for the first time this season. This is the same bunch of players who lost to Braga and failed to beat Wigan last week. It wasn’t till Theo Walcott and Cesc Fabregas came on that we looked to test the Leeds defense as we just went from side to side and gave the ball away.

Szczesny : 7.5/10 (Got a hand to the pen, made a fine save to stop us from going 2-0 down)
Squillaci : 6/10 (Looked slow and sluggish)
Djourou : 8/10 (Our best player today, 3 MOTM games in a row)
Eboue : 6.5/10 (Good pace going forward but wasteful with his final ball)
Gibbs : 6/10 (Gave us nothing going forward)
Rosicky : 5/10 (Very sloppy with his passing)
Denilson :4/10 (Gave away a stupid pen and was poor)
A Song : 5/10 (Gave the ball away on countless times)
Arshavin : 4/10 (Everything he touched went wrong for him, didn’t look up for it today)
Chamakh : 4/10 (Cant remember him testing the keeper or doing anything positive today)
Bendtner : 6/10 (Poor game but unlike Chamakh and Arshavin he keeps going and when he played down the middle we looked more of a threat)
Subs
(Fabregas 59mins) Came on and we looked a better team (Walcott 68mins) His pace saved us, won the pen and we looked dangerous with him on the pitch (Vela 79mins) He should have started the game. Not given enuff playing time at Arsenal