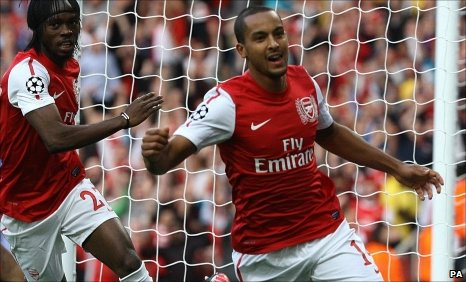 Magic-less win slender victory over Udinese tonight but it showed that this team needs signing.

No spark or playmaker on the pitch and with players dropping and picking up injuries, we are almost down to barebones and the season is only 2 games old.

We got lucky big time tonight, and Arsene NOW has to go out and spend on the quality players we need. The warning signs are loud and clear. We need 2/3 player to turn this team into a special team … The players on the pitch did there job tonight and credit to them. But I have to be honest, we miss Cesc and Nasri BIG TIME!!…Over to you Arsene!…SPEND!

Szczesny 8.5 : Had a busy night and made 2 fantastic saves. 2 games 2 clean sheets for our new number 1 and looks the real deal! { Man of the match }

Sagna 6.5 : Poor going forward and was defensively all over the place tonight.

Koscielny 7.0 : Pretty solid apart from the 91min with a moment of madness that could of got nasty!

Vermaelen 7.5 : So good to have him back. The leader on the pitch and showed just what we have been missing.

Gibbs 7.0 : Played well by taken off at H/T with a hamstring injury

Song 7.5 : Solid and made some great blocks, But his passing was poor and gave the ball away in the 2nd half.

Ramsey 8.0 : Set up the goal and put Theo in again in the 2nd half, Played well but tied towards the end.

Walcott 8.5 : Finished well after 3mins, Was busy and direct all night and maybe should of had 2 more goals.

Rosicky 5.0 : Not a Cesc or a Nasri, Didnt have the magic or the killer pass and came off towards the end and looked in pain.

Gervinho 8.0 : Impressive and ran his heart out. Put Theo in towards the end with a great pass and looked dangerous.

Chamakh 2.5 :  What a player!! Very similar to agueros performance last night {joke}..Looked lazy, poor touch and didnt even look like scoring. So poor it was a joke. Needs to be loaned out or sold because on this show he is not good enough to wear the shirt. But when was his last decent game or goal?

Subs
Djourou N/A : Came on and replaced Gibbs at H/T and lasted 9mins before picking up and knock. He did made 1 great tackle.

Jenkinson  7.0 : Played LB and looked “ok” Did his job well and nothing flash, looks big and strong and good pace

Frimpong 7.5 : I like him. Powerful and got pace, I think we might see more of this lad this season.