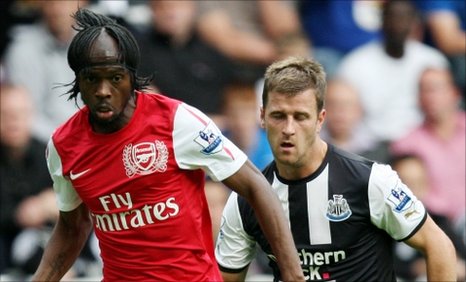 Gervinho was sent off after clashing with Joey Barton

Without Cesc and Nasri Arsenal were just toothless! It took 63mins for the sub Theo Walcott to test the N’Castle keeper with a effort on goal.

That was despite having most of the ball, passing it from side to side and then knocking in a cross to… Nobody #sameoldarsenal

The travailing Arsenal fans chanted “spend some f##king money” during and after the game! Not for the first time.

Wenger said on Friday that we have a big squad and didnt need to spend. but I’m sorry Arsene dont you know that quality is better than quantity.

Wenger only has himself to blame, He should of addressed all of the issues long before the season started. If we were going to sell Cesc and Nasri why wait till the season has started? Are we going to have time to replace them now and of course we are going to pay well over the odds because teams now know that we are going to have over £50m to spend.. But dont worry. I’m sure Mr Penny Pincher wont let us down and will bank all the profits..Again

Like I said a few weeks ago, its not going to be the last time you hear the fans boooo at Arsenal this season.

Its a shame, Arsene should have been remembered for all the great things he did and gone down as 1 of the greatest managers in history! But now he is going to be remembered as a clueless tightwad who refused to spend and address the teams weakness and put his own principles and values above the needs of the team.

Szczesny 8.5 : Confident and commanding,very good game.
Sagna 6.5 :Solid defensively but poor with his crossing. Same old!
Vermaelen 8.0 : Was great to see him back and showed just what we have been missing.
Koscielny 7.5 : Played very well and looks like he has been in the gym
Gibbs 7.0 : Played well, didnt put a foot wrong and looked good coming forward
Rosicky 6.5 : Started the game well but faded in the 2nd half, Not a Cesc or a Nasri thats for sure (Frimpong 85)
Ramsey 6.0 : Couldn’t get involved in the game and looked tired towards the end with his passing (Djourou 90+3)
Song 5.0 : Booked after his 6th foul in 45mins and then lucky not to see red for stamping on Barton. Apart from that, Did ok.
Arshavin 6.5 : Great pass to RVP in the first half but faded in the 2nd half (Walcott 61)
Van Persie 6.0 : No support, wasted our best chance with a poor first touch.
Gervinho 7.5 : Great pace and movement, disgusting final ball. And should of slapped Barton.

Off note : For the 2nd season in a row Mr Joey Barton got an Arsenal player to react and get sent off..Almost 3 with Song.The man is clearly an vile waste of skin. but our players need to wake up and smell the coffee and not take the bate.

Its going to be a long season.. and I hope, WENGERS LAST!!

SPENDSOMEF##KINGMONEY!!… Just like the fans have to “6%”…. and not just on kids who we might see in 2015…. PS : Gary Cahill scored a wondergoal today and looked the part! His price just went up!