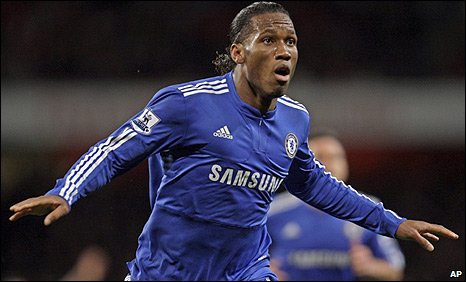 Its just proves how much we rely on Robin Van Persie, And i cant understand why Wenger is sticking with this 4-5-1 without him and Nic we should go back to a 4-4-2. Poor Eduardo was tasked with playing  up top on his own vs 2 massive centre backs. its a lot to ask for any player.

Watching today it was clear to me that we lacked a lot of things. Chavski are just lightyears ahead of us and as they did last season they came to the Emirates and ripped us apart.

I cant understand our tactics. Keep the ball, knock it wide and then cross it to…..errmmm nobody. That was a walk in the park for John Terry and co today.

And we use to blame poor Phil Senderos for not being able to deal with Drogba, Well who do we blame now?

Shall we try the ref? Or the weather?…Or shall we blame Denilson or Cesc or even Arshavin?

The sad fact is there is only one person to blame. And that is the manager, Mr Wenger has put together a bunch of players who are very skillful and have bagfulls of talent. But in the English league you need a few things.

Unfortunately our manager refuses to accept this and thinks he can win games vs the better teams in this league by out passing them….Well in 15 games vs the chavs we have beaten them in only 2 games. If only life was so simple.

But on the possitive side.

We are making loads of profit and with this bunch of kids we will dominate the world within a few years.

Almunia (4) Poor, to blame for the 3rd goal. Cant recall him making a save

Gallas (6) Good until the first goal

Vermaelen (3) I was waiting to see how he would deal with Drogba…The same as Senderos. Maybe even worst

Song (7) Was our best player until Wenger took him off

Denilson (4) Lost count, How many times did he give the ball away

Cesc (3) The worst ive seen him play. Could not give a sh*t at the end. Was giving the ball away and didnt even try and win it back.

Traore (6) Did ok, Showed his pace going forward. But nothing in the box to aim for

Eduardo (4) Poor bloke. It was like a bantamweight vs a heavyweight…Replace by the massive VELA

Nasri (7) MOTM had a shot on target and tested Cech.

If you fancy a rant join the forum ( HERE )

Van Persie OUT for the rest of the season
3 games in a row without a win or a goal. "In wenger we trust?"