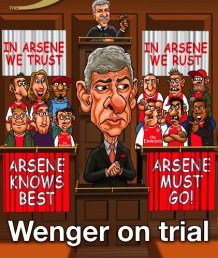 Arsenal Action would like to know how the Arsenal fans are currently feeling towards our manager? So today we have a fans poll.. Which gooner are you.. Trust or Rust?

Wenger Out : Wenger refuses to spend on players. Instead Wenger has awarded mediocre/injury prone crap players with long term lucrative contracts. and now he is sticking to his guns and playings this crazy 4-5-1 that clearly isnt working. In Arsene we rust.

Arsene knows Best : Arsene has given us so much, we owe it to him to give him more time. If Arsene leaves our best players will go with him. And we have worked so hard on the future. Give it time and you will see that his ways will come good. Just like they did before. In Arsene we trust