[Player Ratings] The Kids Are Alright 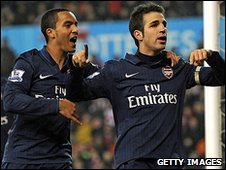 “It remains to be seen whether this young Arsenal team have the strength of character to be contenders, or just remain pretenders.” Err, scratch that. A memo to tired bloggers and Premier League commentators everywhere, you can throw out that worn out adage, ‘lacking in substance’, so often pinned to Arsenal, and come up with something fresh. I witnessed tonight one of the most awe-inspiring and pride inducing moments that I have ever seen in professional sports. Tonight was the night our boys earned their stripes. Call it a journey, a rite of passage, a test of manhood, whatever. The long and short of it is Arsenal is back and Chelsea and United ought to be shivering in their boots. The heights of first and second place suddenly don’t feel so lofty, I bet.

None of the other EPL teams, and I mean NONE, have exhibited anywhere near the strength of character and comradery shown by Arsenal in their encounter with Stoke City. For so long we’ve been branded with the curse of pretentiousness with our technical skill, but lacking the heart to go with it. No longer! I’m not just talking about that dated maxim ‘winning dirty’, I’m talking about hard graft, fighting for your team mates, and never, ever, saying die. If a deficiency in character was all that Arsenal have been lacking for so long, then consider that box checked. In a time when players like John Terry a slapping about with their team-mates girlfriends, Arsenal fans are witnessing one of the most stunningly inspiring and poignant revivals of team character that has been seen on a Premier League pitch…well…ever.
Amidst the languid boos of the Stoke crowd, the resurrection of a simple team huddle proved to be the greatest moment of the football season. Not just for Arsenal, but for the entire footballing world. Why? It was finally some grounding to a sport that is losing its grip on reality. You might put this down to youthful exuberance, but I saw unbridled joy and a burning desire to win for your team mates tonight in Arsenal, and that is something which went walkabout from professional football a long time ago. Teams around the world are glued together by nothing more than heavy wage packets and superstar status branded on their players. I’m looking at you, Chelsea, Madrid, City and the rest. And if it took a bit of youth to give life back to a sport that has become some horribly wayward, then I’m all for Wenger’s policy. Never has there been a moment where I have felt more pride in an Arsenal team than I did tonight. It truly was a coming of age.

As for the Premier League? See you at the top, boys. There’s no stopping us now. I hope we win before we get old!

My player ratings for the match

Almunia – 6: He did what was asked of him and handled aerial balls pretty well after the first debacle.

Campbell & Vermaelen – 8.5: A joint rating for a real partnership effort. They were superb in my opinion. They quickly worked out that they had to be aggressive and pushed onto Fuller hard, and they did it very well; frustrated him and bluntened the entire Stoke attack.

Sagna – 7: A good game for Sagna, he showed his experience defensively, but had the same old probalem of a poor contribution on attack. Having Eboue on masked this a bit.

Clichy – 8.5: What more could you ask from a left-back performance? He showed pace, defensive guile, aggression, and a willingness to run at the defence. Even had the confidence to pop one at goal, and could have been rewarded. Faultless, really.

Fabregas – 9: A performance that snuck up, really. He didn’t look like much was happeneing for him, but all of a sudden he started to assert his control, and the rest was history. Once h hit his stride, his passing was perfect and he was unbelievably creative. Great pressure penalty, as well as a fantastic assist to vermaelen.

Eboue – 7: Did very well, I thought. Perhaps guilty of staying on the ball a little long at times, but thats what you get when you play him out of position. He doesn’t run into those situations at Right-back; he plays on instinct. He did really well getting around the Stoke defence in my opinion, but was looking tired and disheartened after the Ramsey injury.

Ramsey – ?: Not really sure what rating to give him. Just hope its not too serious and that he’ll be back soon. Also hope this doesn’t hurt him for the future.

Nasri – 7: A good performance, I though. Things were hot and cold for him, some were coming off, others weren’t. he needs a goal for his confidence, its probably playing on his mind. Some good passing and creativity in and around the box.

Bendtner – 8: Excellent game, excellent goal. He did well and against a very tall and very strong Stoke defence. Most easily matched him for height, which is saying a lot. Fantastic goal, and its great to see him slotting a few. He was quite tenacious and didn’t waste posession in the final third as is sometimes his habit. Shooting from distance looked a little lacklustre.