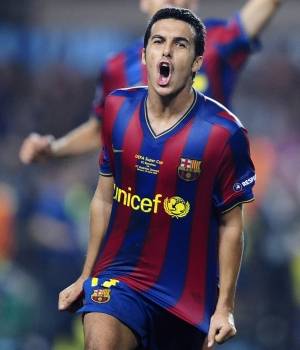 Reports coming from out of Spain have confirmed that Barcelona winger Pedro Eliezer Rodríguez Ledesma better known as Pedro has requested a transfer in January. The Spanish International has found his opportunities limited since new Coach Luis Enrique has taken charge and with the arrival of Luis Suarez he has found himself dropping down the pecking order. Barcelona have a wealth of attacking talent Lionel Messi, Neymar, Luis Suarez and young talent Rafinha have all been preferred to the 27 year old attacker this season it now looks like it is time for Pedro to move on.

If you believe last season’s transfer speculation the Spanish winger was very close to making a Premier League switch just a matter of months ago he was linked with Arsenal, Manchester United, Manchester City and Liverpool but Barcelona were not interested in losing him. The goalposts seem to have moved and it looks like he could possibly be available. Pedro would command a large fee, Arsenal secured the services of former Barcelona team mate Alexis Sanchez for around £34 Million and I would suggest any suitors would be looking at a similar amount if they are to clinch any deal.

The Pedro to Arsenal rumour is an interesting one, amid claims of Mesut Ozil being unhappy in England and possibly seeking a move next Summer the Barcelona man would be a perfect fit and is more of an Arsenal player than Ozil actually is. In many respects Pedro is just as deadly, intelligent and quick as Alexis Sanchez.

Sanchez showed at the weekend he is more than capable of filling in for Ozil in the infamous “No.10” role this would leave Theo Walcott to play on the right wing and Pedro could comfortably take up the left wing/ forward role that still has not really been filled.

Gibbs Adds To Arsenal’s Injury Woes
Should Arsenal Bring Song back To The Emirates?