NO SIGNINGS! Wenger lets the fans down AGAIN! 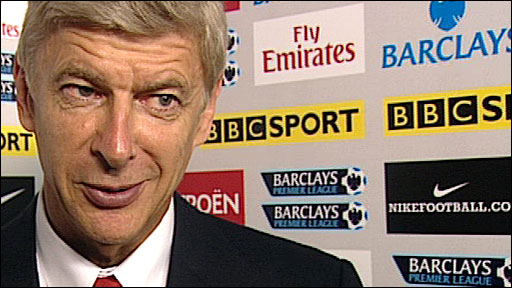 Well well well…The man has done it YET AGAIN!!!..AND JUST LIKE I TOLD YOU (HERE)

Not for the first time, our manager has let us down in the transfer market and failed to do AS he said and replaced Adebayor and Toure.

Why did you think he would? This is not the first time Wenger has done this. All summer he has said things like I want to keep this squad together, I will only sign players if we sell (Adebayor) Wenger has toyed with the Arsenal fans all summer and hinted that he would bring in 1-2 players and he had the money to do so.

So what was the point in selling Adebayor and Toure? I was sure that the reason why we allowed BOTH to leave would be to invest the cash back into the squad and on new players. But yet again we have been lied to and let down by Wenger. Just like the last 3 seasons.

Selling players and not replacing them, We have still not replaced Flamini/Diarra/Gilberto.

We are still waiting for Wenger to sign that powerful centre back to deal with Drogba. Its not the first time Wenger has done this, No doubt he is going to come out and say the same thing to us..Rosicky is going to be like a new signing, I didn’t want to sign new players as it would kill the progression of the kids…And no doubt the “in Wenger we trust brigade” will come out and blame the board for not giving him the cash to spend on new players.

Wenger has the cash to spend from the sales of Adebayor and Toure to spend if he wanted it. SO WHY DIDN’T HE DO SO?

After hinting all summer that he would? Why have we been let down YET AGAIN! Why do we keep allowing this to happen? I’m sick of Wenger and all his lies, I’m sick of the “in Wenger we trust brigade” that keeps telling me to F-OFF and support Man City or Spurs.

Why can’t you people see what’s really going on at our club? Wenger is killing the club with his stubborn transfer policy and you fans who keep saying “ he knows what he is doing “ Well if that’s the case then why have we not won anything since 2005 and since Vieira was sold?

How many more years are we going to put up with this shambles? Selling key players every summer. Never investing that money back into the team. The board saying we have money to spend, Wenger saying he has money to spend and tells the fans that they would be reassured by what they see coming in only to let us down.

Wenger tells the fans that his priority is keeping the team together and then sells our best players. Like I have said many times. Wenger and the Arsenal board only care about one thing…PROFIT £40m for the board this season Wenger..WELL DONE

Who are you going to blame at the end of this season when we finished out of the top 4? The ref? The FA? Lets blame that cheat Rooney or Evra? NO even better lets blame the midweek international games?NO lets blame Platini?

There is only one person who is to blame and that’s the Arsenal manager…and its not the first time.

The only problem is most of you gooners wont admit the truth.

Almunia should not be the Arsenal number 1 keeper
See the truth,The Arsenal Accounts and Chairmans report