NET Spending since 2005, Is this the reason why have not won anything? 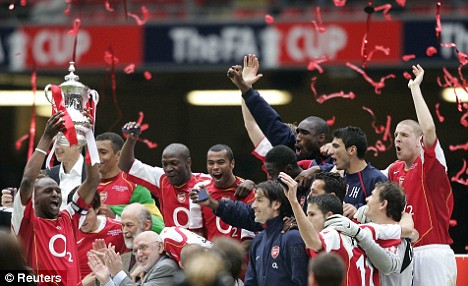 Since winning the FA Cup in 2005 Arsenal have not won anything?

Why?… Some might say we have been unlucky? Poor refs etc…  But most put it down to the sales of key players and a  lack of investment in quality replacements.

Add to that money from the deals from Bentley, Muamba & Diarra, Arsenal are about £15m up from player sales ONLY…lets not inc Match day revenue, which is about £3m each home game or the other bits from champions league football or anything. Just on player sales since 2005 we have spent NOTHING!.. How do you expect us to win anything but selling our best players replacing them on the cheap?

There is no doubt that Wenger and the board are doing a wonderful job of balancing the books at Arsenal, But at what price?

Is this the reason why Arsenal have not won anything since 2005?…Yes, I think so. Wenger went from being a great manager to becoming a great financial accountant.

That fans are not asking Wenger or the board to put the clubs future at risk as we have all seen what happened to Leeds and Pompey. But come on!  We need SOME investment back into the team if we are to win the league again.

This summer we were told that Arsenal could now compete with Chelsea in the transfer market?…Yeah its showed

Every year Arsenal publish mega profits, the fans are being asked to spend money on 4 kits every 2 seasons, Kits that are hardly worn by the first team i might add.. How many times did Arsenal wear that white kit last season?

Look at this summer, with less then 10 days till the start of the season, NO KEEPER, NO DEFENDERS. 6 players out Eduardo, Campbell, Gallas, Senderos, Silvestre, Merida… 2 players in... And who thinks we are stronger?…But wait, Djourou and Co are like new signings right?

So don’t you think its time that Arsenal started to spend?…..I do and I wont be spending money on new kits until that time.

Montpelier Say “No Deal With Arsenal”
Is Rosicky about to sign for Galatasaray?