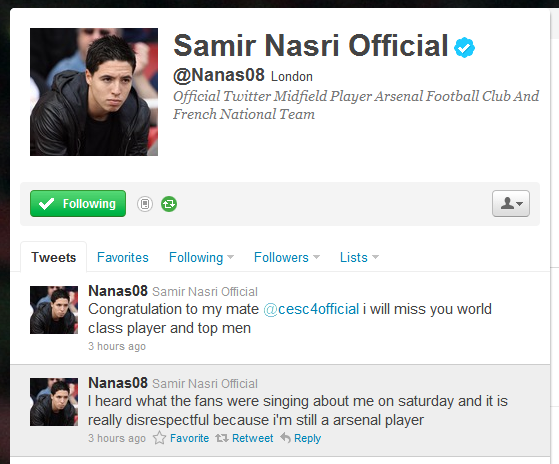 I have been an Arsenal fan since 1976 and supported the club and our players through good and bad times.

Today I saw a tweet by yourself saying the following

Now let me get this right Samir! You feel disrespected because SOME fans chanted your name during the Newcastle game and basically told you to f##k off!… I can accept that you would feel disrespected if you was totally blameless in all of this.. But lets look at why SOME fans just might be slightly pissed off with you.

You have apparently been in talks with Man Utd and Man City about a mega MONEY move.

You have gone to the press and slagged off the manager and our club.

You are apparently SICK after playing for France in midweek and missed our opening game.

And despite the club bending over backwards to keep you, you are willing to turn your back on the club and fans that supported you through poor form and bad injuries.

And NOW the day we lose our captain .. You decide to hit us with this rant.

The key word in your rant for me was “STILL” You didnt say “I am an Arsenal player” .. In fact during this time you have said nothing to reassure the fans at all. Well apart from saying “dont believe everything you read in the press”…Oh and then what did you do? You went to the press and opened your heart!

Now dont get me wrong Samir, I know that most modern day footballers are money grabbing scum and there is very little loyalty in the game anymore. BUT please dont insult us and play the victim in this.

In life Samir my father told me something that will stick with me forever. “Treat people how you want to be treated”

If you treat us with disrespect then dont moan when you get it back!

On the flip side, If you show us you love us then you will get nothing more then love and respect back.

Its simple. Even a £120k a week footballer can understand it.

What you also have to remember is this, most of the fans who turn up and support the club, earn nothing in the region of what you do and would probably play for the club for nothing. Just the honor of wearing that shirt would be enough.

You are living the dream that so many of us wanted. You ARE loved by our fans, Your goals vs the spurs, your hands to ears celebrations, we took you to our hearts.

All we ask is for you to stop playing games with us.

You want to leave us then fine, do it for the right reasons and in the right way. Dont play the victim when you are acting the way you are!

I hope you stay at Arsenal for many years to come and show everybody who Samir Nasri really is and thats a great footballer player and NOT a player motivated by MONEY!

A video… of what the fans feel towards you!