Mourinho “How can Wenger NOT win anything since 2005” 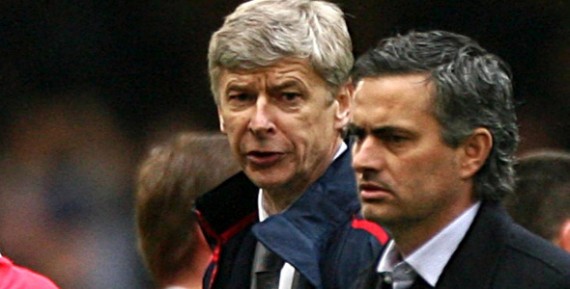 Real Madrid coach Jose Mourinho has launched a vicious attack on Arsene Wenger over Arsenal’s failure to win a trophy in the last five years. “He should especially explain to Arsenal supporters how he can’t win one single little trophy since 2005.”

The former Chelsea boss was retaliating after Wenger denounced Real’s controversial time-wasting tactics at Ajax on Tuesday, which saw two of the Spanish giants’ players conveniently sent off.

He also mocked the Gunners’ 2-0 midweek Champions League defeat by Braga, which has left Arsenal in danger of crashing out, and slammed the Frenchman’s claims his side is still mostly inexperienced.

Mourinho added: “Instead of speaking about Real Madrid, Mr Wenger should speak about Arsenal and explain how he lost 2-0 against a team in the Champions League for the first time.

“The history about the young kids is getting old now.

Wenger has angered his old Premier League adversary after slamming Real’s antics near the end of their 4-0 win in Amsterdam.

Mourinho and four of his players have been charged by UEFA with improper conduct.

The Real chief is accused of instructing midfielder Xabi Alonso and defender Sergio Ramos to pick up second yellow cards deliberately and be sent off so they will be banned for their team’s ‘dead’ final Group G clash with Auxerre and then take clean disciplinary records into the knockout stage.

Mourinho pleads not guilty but Wenger hit out: “It’s a pity to see that from a big club. It looks, frankly, horrible. You don’t want to accept that.”