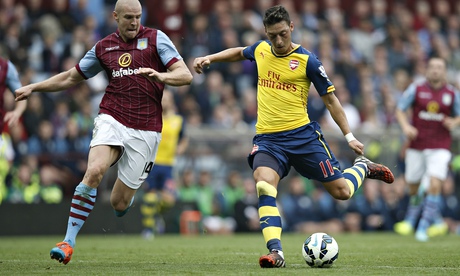 Aston Villa and Arsenal went into the fifth round of Premier League fixtures both looking to preserve their unbeaten runs but only one would remain unbeaten come Saturday Evening. Much of the talk before the game was all about Arsene Wenger’s formation and the much maligned Mesut Ozil, there have been many fans divided over where he should play, whether he should be dropped? or whether the £42 Million man should be sold? To many Arsenal fans relief Wenger opted for a repeat of last seasons system, Arsenal lined up in a 4-2-3-1 formation with Ozil centrally behind Danny Welbeck.

Aston Villa started the brightest as they put the shaky looking Arsenal back four under pressure in the early minutes, it was thanks to Szczesny that they kept it at 0-0 with him denying Fabian Delph from range and later on saving from Central Defender Ciaran Clark from close range. Ozil was starting to create things from his favourite position his link up with was especially impressive and he had the freedom of Villa Park at times. Welbeck picked the ball up and found the run of Ozil who pulled on Clark’s shoulder and timed his run perfectly, Ozil steadied himself and slotted home past Brad Guzan to give Arsenal a 1-0 lead on 32 minutes. Arsenal now looked confident and their tails were up Ozil played a lovely one-two with Aaron Ramsey and found Welbeck’s run at the far post and he slotted home into the roof of the net from six yards out to claim his first Arsenal goal, two goals in as many minutes had stunned Lambert’s Aston Villa side who had only conceded one goal all season. It got worse for the home side in the 36th minute, Villa struggled to clear their lines and a Kieran Gibbs effort was diverted into his own net by Aly Cissokho. As the sides went in at half time it was surely game over and three points for Arsenal.

The second half was a bit of a non event with Arsenal taking the sting out of Aston Villa’s attacks with Lambert’s side still looking shell-shocked by the 3 goals in 4 minutes that had all but killed them off. Most of the talk after the game will be about Ozil who showed what he can give the team when he is used in the right way, Ozil is a luxury player but a player of real quality. Wenger will surely continue to persist with the system that saw them finish just seven points off of Premier League champions Manchester City last season. The balance was a lot better and much more suited to the style of player Arsenal look to play. The previous 4-1-4-1 system which saw Ozil playing as a left winger was unbalanced and ineffective and will surely be never seen again.

Aston Villa on the other hand will be disappointed that the goals conceded came in quick succession, they also missed a few key players that were struck down with a virus which couldn’t have helped their cause but 10 points from their first 5 games is a good start for a side that many tipped to struggle. Villa lacked a serious goal threat today but they will change when Benteke returns from injury he has been sorely missed up front and will surely improve their chances in a push for a top six finish.