Its time for Arsene Wenger to leave Arsenal 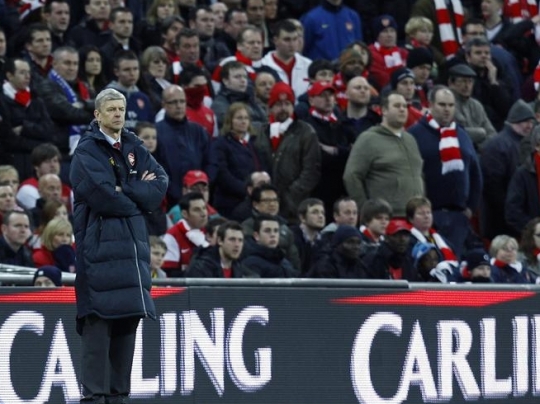 Well this is certainly a debate that always opens up a huge can of worms every time, and divides fans opinions, normally to abuse, to criticism and always always being reminded of the past glory that Arsene Wenger brought to the club in his first nine years since joining in 1996 after the departures of George Graham – for me he will always be more preferred manager of choice to Arsene Wenger for his ruthlessness, his ability to mould probably the best defence the Premier League and European football ever saw, creating an England number one goalkeeper for many consistent years and six trophies, consisting of a domestic cup double in the Fa Cup and League Cup in the same season, two 1st Division titles and the European Cup Winners Cup, (major domestic trophies – not including Community Shield/Charity Shield which is certainly not a major domestic honour), in nine years as opposed to seven trophies consisting of three Premier League titles and four FA Cups – including into that two lost European finals in the Uefa Cup against Galatasaray and also the Champions League final against Barcelona.

But I truly believe that the of Arsene Wenger is shortly coming to an end, for many reasons really, but the main reason being with a number of fans alike in recent years, the fact that Arsenal for the past seven years have been in decline, largely due to the manager I would say, he has allowed our biggest players to leave the club whilst at the same time filling the boards pockets with the profits from these sales, he is far too arrogant and stubborn – always quick to blame everyone right down to the blade of grass that blew the wrong way for defeats, when it is plainly obvious that he lost his way now, this season and last season are prime examples of this, and every season since 2005, we are always contenders into the final third of a season when for some reason the club slips until we just manage to fulfil the clubs criteria of maintaining a top four finish to bring the Champions League bonus financial reward to the clubs pocket whilst at the same failing to reinvest heavily in players, the start of this season everyone and his dog knew that Samir Nasri and Cesc Fabregas were going to leave the club and did nothing to fill the voids left by arguably our best two creative players, he also allowed first choice left back Gael Clichy leave the club without fully covering that position.

Another factor for Wenger’s time being over is that of the fact, that for seven years we have failed to win any silverware whatsoever despite at the start of every season we hear of the potential and promise of the squad, I mean how many times have we heard, ‘the team is maturing’, the team is learning’, Wenger harping on about our mentality the list could go on and on, but the cold hard fact is that every season the team fails and comes up way short of expectations and the team seems to be never ending learning, for years we have heard Wenger going on about youth and put all his empathiseeee on that, yet what has it actually produced, three regular first team players in over 10 years in former Ashley Cole, Kieran Gibbs and Jack Wilshere as regular first team players from grass roots, and before people mention Fabregas etc, he along with the multitude of foreign youth players never joined the club until they were 16 so did not develop from the grass roots structure that Wenger placed so much enthusiasm and potential on, in fact 98% of the potential youth players mainly British at that get loaned out never to return to wear the shirt again.

But for to long have we had to listen to years of excuses, it’s time this season for Wenger to put up or go, to bring the results of season after season of failed promises, even now it is a well needed fact we need fresh blood into the team, and yet with 12 days left to go in the transfer window not one signing has been made, with Wenger constantly saying he will not spend in this window even now Taiwo has singed for QPR, Cahill has signed for Chelsea and Hazzard looks to be on his way to Chelsea also and Remy looks set to join Spurs – infact every player we are linked with or on our radar never come, last season was a prime example in January as well, everyone from fans to pundits to critics made notions on how Wenger needed to invest – he didn’t and by mid February we had lost the Carling Cup final and our season went downhill, eventually being lucky that Spurs slipped up in their last games of the season in order for us to clinch fourth spot and bring that Champions League financial boost to the board once again.

Yes Wenger did great things for the club in years gone by, no-one not even myself can dispute that fact, but how long have we got to be reminded of Wenger achievements, yes he created the Invincibles seven years ago now, yes he developed players such as Viera, Petit, Henry, Fabregas and currently Van Persie again that fact cannot be disputed, but how long will Van Persie stay for, if we cannot win anything this season he will be off make no mistake on that, and with Wenger’s reliance and defence of a huge stockpile of fringe and deadwood players the future certainly doesn’t look bright at all for the club, and yes we can blame the board for it also but it falls squarely on the feet of a manager who really has no balls to square up to the board to confront on their philosophies and principals and wage structure etc.

When you look at the Nasri situation in particular, one cannot help but look across the road at Spurs – as much as I hate to believe me, and their stance on their most creative midfielder Luka Modric whom they said firmly and flatly was not for sale at any price and going nowhere and they stuck to that resolve Modric is still there whilst the board and Wenger allowed Nasri to dictate terms and leave to join City.

Yes the changes need to be made at board level but they start at the managers office, and if by May we have failed to even get into a top four placing after so many excuses season after season and failure then it is time for Wenger to au revoir and leave the club whilst he can still hold his head slightly up, if it carries on any longer, just like in 1994 when he took a Monaco team who had become Ligue One champions once, and Champions League semi finalists once as well as one time French League Cup winners in seven years he implemented his philosophies and youth project to the French club only for them in 1994 to become a mid table team in Ligue One finishing tenth in that season before he was sacked for the decline of the team and went over to the Japanese League where as they say the rest is history

Arsene Wenger may be a great economist and businessman in that aspect, as a manager and tactician he is not great, how many times during the match do we see him sat on the bench making no notion to push the team forward.

Seven trophies in 15 years in the same two trophies is not a great record for a top four European club in that time scale, especially when you look back and think for seven years it has been barren and it doesn’t look like any honours will be brought for some time ahead, I’ll leave it for your choice for me the answer is very simple, no honours for the seventh consecutive season, then a management change is needed to fix that (what other top four club would keep a manager on that has failed consistently in seven years almost to bring honour back to the club – none!) and bring the good times back to the club, I could go on and on really, but I’ll leave it on that point for you.

Beat Man Utd Or Go Home
[Protest] Hill-Wood, Gazidis, Wenger.. OUT OUT OUT!!