I feel Sorry for Eduardo, But Arsenal are doing the right thing 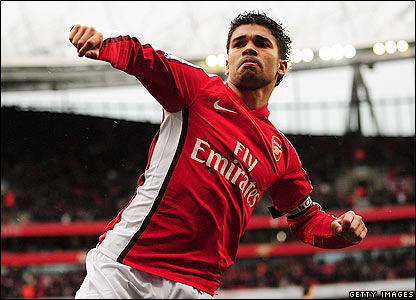 A number of reports in the press over the last 48hrs all saying the same thing.

Apparently Eduardo is heading for the Arsenal exit after being told by Arsenal manager Arsene Wenger that he is not in his first-team plans for next season. I couldnt agree more with Wenger over this.

Eduarod (27) has struggled to return to his early Arsenal goalscoring form and has never looked the same player since his broken leg in 2008.

The Croatia striker has failed to score in his last 12 games and seens to have lost his pace and eye for goal.

Arsenal have recently signed striker Marouane Chamakh to partner Robin van Persie, and this has pushed Eduardo down the peaking line.

He is believed to prefer a move to a European club rather than stay in the more physically demanding Premier League.

Eduardo has been linked with a number of clubs this summer,inc Olympique Lyon & Sevilla.

in Carlos Vela it seems Arsenal have the perfect replacement for Eduardo “if” he is on his way out. I feel sorry for Eduardo but Arsenal are not a charity and are doing the right thing.

For more on this check the Eduardo thread on the forum : www.arsenalaction.com/forum/

Guus Hiddink – “The German passport for Mesut Özil is false”