Has Wenger ever signed a "good" goalkeeper? 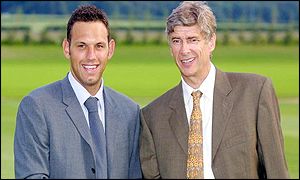 When Arsene wenger took over at Arsenal he inherited a team with a solid defence and a world class goalkeeper in David Seaman. I ask you today has he ever really replaced him?

Jens Lehmann was eccentric and often infuriating,but maybe the only keeper that Wenger has signed who did a decent job as our number one.

With all the top teams, you need a solid number one to give confidence to the rest of the team, Arsenal have not had this for years now. Manchester United lost a world class keeper in peter schmeichel and had a few problems finding the right man until they signed Edwin van der Sar, Both Liverpool and Chelsea have outstanding solid keepers, Even Villa and Man City have world class keepers.

Arsenal on the other hand have a host of comedians between the sticks from Almunia to Fabianski. Personally i think they are both not good enought to be our number one if we want to win things.

Alex Manninger
Signed by Arsenal in June 1997 as cover for David Seaman. During the 1997–98 season Seaman suffered a long spell out injured and Manninger ably covered for him, enjoying a spell of eight clean sheets in a row in the league, a club record. However, without a consistent run in the side he was unable to maximise his potential.and after a few poor games in the league cup and low on confidance as he knew he was never going to be number one,he was shown the door. 64 games over four seasons
Arsenal action ratings 7/10

Richard Wright
Wright joined Arsenal in July 2001 for £6m on a five-year contract and was signed by Arsène Wenger as a long-term successor to David Seaman. He was given on 22 games before he was shown the door.
Arsenal Action Ratings 6/10

Rami Shaaban
In August 2002, Shaaban joined Arsenal as a possible replacement for David Seaman. When Seaman was injured, he played in two matches in the UEFA Champions League at home against PSV Eindhoven and away against AS Roma as well three matches in the Premier League. Unfortunately, Shaaban broke his leg during training on Christmas Eve 2002 ultimately sidelining himself for the rest of the season. Due to the severity of his injury, Shaaban feared he wouldn’t be able to play again. However, after rigorous physical therapy Shaaban was able to bounce back. When Seaman left Arsenal in the summer of 2003, Arsène Wenger signed Jens Lehmann who played every match that season as Arsenal went undefeated for the entire 2003-2004 English Premier League season. Shaaban was plagued by injuries and failed to become Arsenal first goal keeper. As a result, Shaaban was loaned out to West Ham United and consequently ending his Arsenal career. 3 games for Arsenal.
Arsenal Action ratings 7/10

Guillaume Warmuz
signed a short-term contract with Arsenal FC, as cover for both David Seaman and the injured Rami Shaaban, but did not play any first-team matches
Arsenal Action Ratings N/A

Mart Poom
Poom was signed by Arsenal in August 2005 as temporary cover for Jens Lehmann and Manuel Almunia. The deal was made permanent in January 2006.He made his debut for Arsenal on 8 November 2006 in a League Cup match against Everton, replacing the injured Manuel Almunia at half-time; Arsenal won 1–0. His first and only appearance for Arsenal in the Premier League came on the last day of the 2006–07 season against his former team Portsmouth, in a goalless draw. 2 games 2 clean sheets
Arsenal Action Rating 7.5/10

Jens Lehmann
Lehmann joined Arsenal on 25 July 2003 as a replacement for David Seaman, and played every match as Arsenal F.C. went unbeaten for the entire 2003–04. However Mad jens was known to the odd moment of madness but thats maybe why we loved him.
Arsenal Action Rating 8/10

Manuel Almunia
Almunia signed for Arsenal for an undisclosed fee on 14 July 2004. He was given the number one after Jens Lehmann left for Stuttgart at the beginning of the 2008–09 season. In 2008, Almunia signed a new long-term contract with Arsenal.
Arsenal Action Ratings 6/10

Łukasz Fabiański
On 8 May 2007 Arsenal agreed an undisclosed fee with Legia Warszawa. Hit and miss since signing
Arsenal Action Ratings 6/10

Personally, I would go out this summer and sign hugo Loris, If Arsenal want to win something again we need a world class number one.