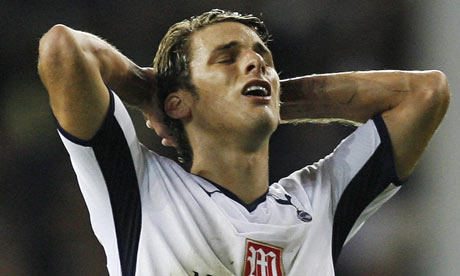 Ex Arsenal & England football star David Bentley was punched in the face as he sat in a restaurant with his heavily pregnant fiancée.

The Spurs midfielder, 24, had been enjoying a meal with Kimberly Mills and another couple when a man walked up to their table after finishing his own dinner – and took a swing at him.

Stunned Bentley was left reeling in his chair as the attacker ran out of the restaurant.

The footballer’s friend chased the thug – believed to be in his late 20s – but he was also attacked and left with a cut face and black eye.

Waiters at Nolita bar and restaurant in Brookmans Park, Herts, immediately called the police and Bentley, who was said to be “badly shaken”, is keen to press charges.

A spokesman for the player – who joined Tottenham after starting his career with arch-rivals Arsenal – said he was deliberately targeted.

Join the forum and dabate the issues at Arsenal www.arsenalaction.com