Could the new partnership between Walcott and Ozil save our season? 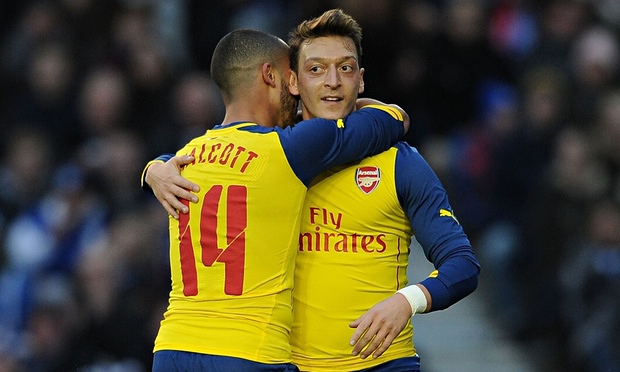 Watch out Gooners there is a new partnership emerging in the form of Theo Walcott and Mesut Ozil and it looks like it is going to be a fantastic one. Both players have just returned from injury and were more than impressive in the game against Aston Villa at the weekend.

Despite the fact that Walcott and Ozil have only played in five games together they have actually formed a strong bond and taken the time to train with each other which was evident on the pitch when they played on Sunday.

Walcott recently spoke about looking forward to playing with Ozil and about trying their new solid understanding of each other and they way they both like to play.

Speaking to Arsenal.com  he told them:

“I’m relishing playing alongside him,” the England forward said. “We managed to bond very well on the pitch because he likes runners, he likes people going in behind, which gives him time to turn and then look for a pass.

“The runs also attract other players, so it gives him and other players more time on the ball. I’ve enjoyed working with him back in training. He’s just come back from his knee injury and with Alexis in the team as well, it’s a whole different ball game.”

Walcott’s recovery has come at the right time for Arsenal, he has been sorely missed especially his pace, link up play and passing. Walcott is always one of those players that can run, we required his speedy runs and ability to get to the ball as well as those beautiful crosses into the goal from the right. Walcott gets involved with every part of the game too, he might not always score but he gives his all and hen he doesn’t play it’s only then you see just what you miss from him.

Ozil has returned in fine form and that was proved at the weekend with that incredible flick that Giroud ran onto and scored in the eighth minute from, he also went on to score a goal himself in the second half. He has really bulked himself up during recovery which has helped him in many areas- strength and physicality to start with. Ozil has been hugely criticised in the past but when played in his preferred position you can see how good he really is and the best is still to come.

If both these players can remain fit for a consistent amount of time then they will really start to compliment each other on the pitch and their partnership could be an important one.

The skill they possess technically will only enhance the way they both play and add to the team, it bodes well for Wenger’s fast passing football philosophy that he still admires as both players are confident in that style of play. The speed that they both possess plus the newly found confidence between the two players will boost Arsenal’s attacking force going forward, it will also take the pressure off Giroud who can concentrate on getting in the box to receive the passes from either of these two to score instead of running back and forth.

It’s going to be an exciting few months for these two players especially when they link up with Sanchez when he becomes fit again. Could they rescue Arsenal’s season in time for May? That remains to be seen.

How Far can Arsenal progress into the Champion’s League?
Why the Arsenal and Tottenham rivalry is still so strong